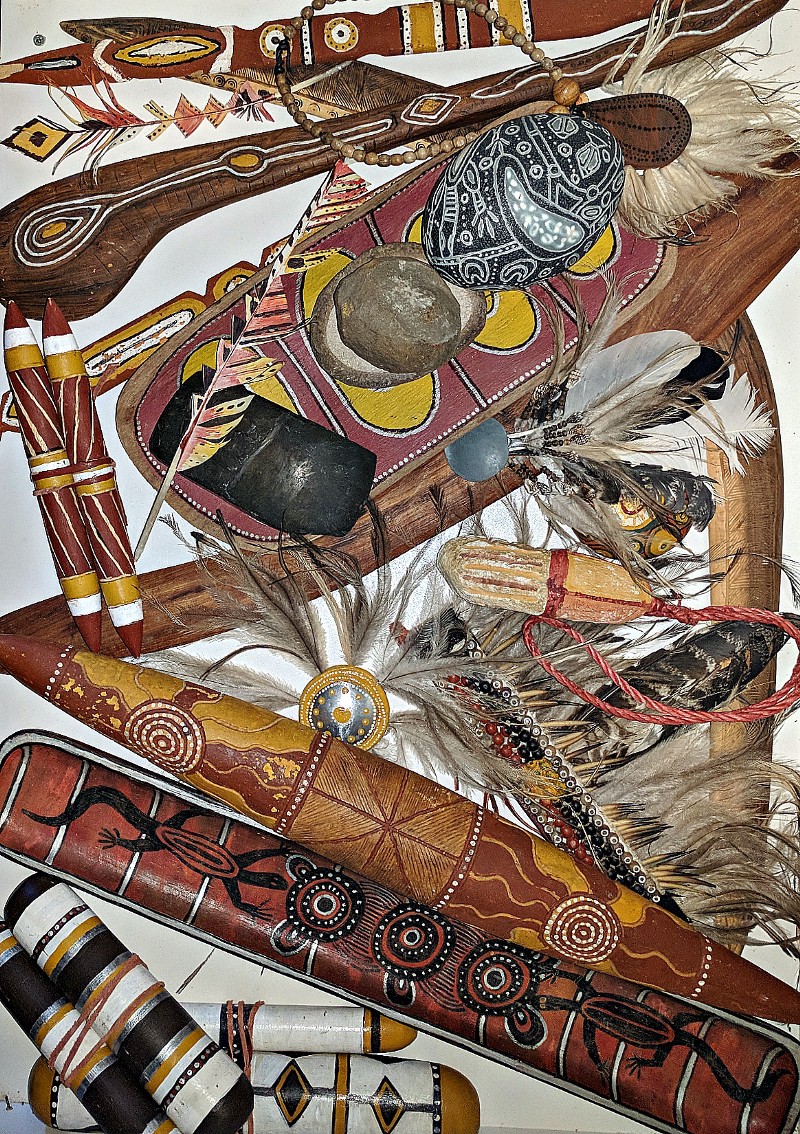 The Craft and Art of Jupuul Mari

Mehi means girl in the gamilaraay dialect Miyaay. Moree is Mari and Mari means man. That is just the way whitefellas take our language and put it in their phonetic context.

Because our language is not written, it is only spoken. They misconstrue our meaning of words by listening to it in their own phonetic way. And they end up with all the meaning of the word taken out.

First and foremost, if you’re not one of these you’re not Gamilaraay.

I grew up in Moree on the black soil plains. My family have always lived on the banks of the Miyay River. They were here when white man arrived in this part of the continent and we are still here to this day. This is our duuwarri, dreamtime waterhole, this is cubbutha country, my spiritual home .

Some people are destined never to find a home.

Others are born there.

In a rush to the future, the past is forgotten.

The rich black soils of the Moree Plains either side of the Mehi River stretch into agricultural industry, and out lying villages .

These are his words:

When I was young there were a lot of old people in the town. Now they’re a lot of young people, and they are lost, because they don’t know where they came from.

There are a lot of people in Moree from other places.

Where is their history in this place?

Impersonation, that’s what we’re doing, we’re impersonating a Western culture, a Western society that’s been inflicted upon us. Always jumping through the hoops and ticking boxes just to clarify to the white man that we are segregated.

We don’t want to be a part of your constitution, your laws, your system. It’s failed us since you invaded our country.

The secret of the scarred trees is that their a guide to what frequencies you have to hit to resonate the vibration that connects the conscious life with the spiritual.

The designs on the trees are actually patterns just like when you put a bowl of water on a speaker and you do high frequencies. A unique design comes from the bowl of water. Those designs are on the trees so people can hit those frequencies with chants and stomping on the ground, hitting clap sticks.

That give this melodic vibration that connects us to our creators. All indigenous cultures right across the the Earth all believe that we’re all connected through vibration.

I’m honestly with the land so that we can send our message straight up from this to the Spirit in the Sky.

And all this is common sense for indigenous people right across the planet. Work on commonsense. None of them exerted themselves to get anything.

They want the easiest way in the simplest way to go and do it.

You’ll never see and indigenous people standing around with a fishing rod trying to catch a fish because they don’t fish for sport. We go the simplest and easiest way to get that sustenance but we were uncivilized. Because we were lived off the land we were savages.

I do my culture through my heart through my song and through my dance. I used to speak I used to teach language but I don’t teach you anymore because you don’t get very language doesn’t get the respect that it deserves people think you’re talking s***.

Who says your Western civilisation is the right way of living, the greedy way? It’s a wanting way, it’s not a needing way. Everything we did was for the betterment of the clan. No one was greedy. You are nothing but the land that you’re on. Talk about religion talk about Jesus talk about Muhammad talk about Allah they got no premise here on this continent.

They come over on a boat or on a plane or whatever else. We had our religion and culture system and more but white men couldn’t see that because we had no clothes. We weren’t nomadic people. We were connected to one part of the country.

You got speared in the leg if you crossed another person’s boundary without permission. So how dare they say that we were nomadic people. We all had planned boundaries like a house. Someone else’s boundary was just like break and enter today.

We don’t live under a flag. We lived under the sun and the moon and stars. They were our guidance throughout the night, and to tell us what to do the next day.

Night was story time. White people go stay up eight hours of the day at work, go home and sleep eight hours of the night. That was not in the black fellah’s way of life. We got up before the sun got up. We were out searching for food, checking our traps, setting new traps.

Then we went home, back to our camp, whatever part of the country that was.

It’s just respect and no one is singing, no one is speaking the language of their land.

We are always conforming to mainstream society. Why?