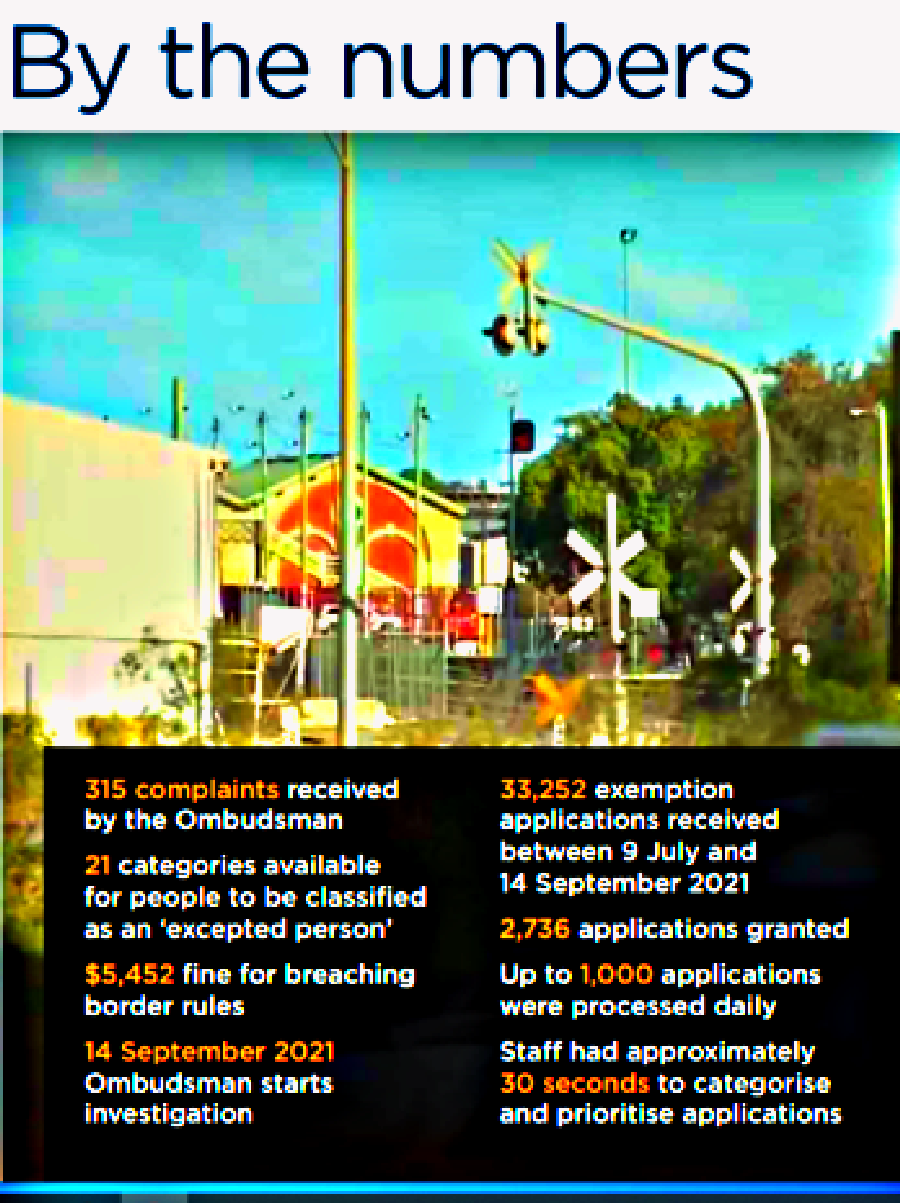 “I feel anxious, stressed and depressed every day at the thought of being stuck in NSW, away from
my parents and family back home in Melbourne … I am scared, alone and losing all motivation to live
… Please, Please, Please, allow me to come back home. ”

What does it feel like to be locked out, not merely locked down? Everyone in Victoria now knows about lockdowns; we have all had our freedoms limited since the start of the COVID-19 pandemic in March 2020.

We even got used to border controls: for almost two years, Australian states and territories have imposed them, often on a few hours’ notice, in response to spikes in cases.

Countless plans have been upended by lockdowns and closures, or the prospect of isolation and quarantine.

Since January 2021, Victoria has operated a traffic light system, where every person wishing to enter the State required a permit, based on the latest health advice. Travel was inconvenient, actively discouraged, but not impossible.

But the closure of Victoria’s borders in July 2021 impacted thousands of Victorians in ways few, if any, could ever have contemplated.

First, on 20 July 2021, Victorian residents in red zones were given 12 hours to cross the border – an impossibility for many, especially the elderly or those with young children in remote parts of NSW.

Then on 23 July 2021 the lockout hit, retrospectively applied, so no-one could enter unless they were an ‘excepted person’ or had an exemption. Overnight, thousands of Victorians were locked out of their own State.

For the first time in over 100 years, our border on the Murray River was closed.

This was not wrong: we assessed the Border Directions and concluded they were lawful. They were updated and reissued each time following detailed advice justifying their necessity, including current information about community transmission of COVID-19 and consideration of the human rights implications.

People could request an exemption for a number of specified reasons, including end of life events or returning home for health, wellbeing, care or compassionate reasons. The Department had a tough job to do, quickly establishing systems and onboarding significant numbers of staff to handle exemption applications, all in the context of the constantly shifting sands of the pandemic.

So far, so reasonable.

It quickly became apparent the problem was in the execution.

Thousands of people, many likely relying on the traffic light system, were stranded. People began to complain to my office, although anecdotally it seems few even knew they could complain. Many of these complaints were heart breaking. People who had travelled to visit ill or elderly relatives, or who needed to return to care for them. People unable to return to care for their animals. People who had moved for jobs or study whose circumstances had been upended by the pandemic, who were homeless because their homes were in Victoria. People paying double rent with no job. Pensioners paying out money they could not afford. People desperate to attend vital medical appointments, told no, they could see a doctor in NSW. All these people found themselves ineligible for an exemption.

“We cannot let this happen again.”

This was not merely a problem of the volume of requests.

With almost 8,000 exemption applications open in early August, the Domestic Exemptions Team was scaled up from 20 staff in early July to 285 by early September. Decision-makers were given detailed guidance on when to approve.

The evidence required was extensive. It included statutory declarations, proof of residence or ownership of animals, letters from medical professionals, financial statements, and statements of relationship to people who were dying.

The ability to respond was inherently problematic for people in caravans or temporary accommodation; or people unfamiliar with technology, the internet or without access to it.

Another complainant needed to travel to help care for her sister with an intellectual disability and terminal cancer, who was living with their elderly mother. She was asked for evidence of her sister’s cancer diagnosis, treatment and life expectancy; her birth, marriage, divorce certificates and driver’s licence; and a statutory declaration from her 86-year-old mother explaining why it was difficult for her to continue looking after her daughter.

It was hard not to agree with the complainant that such requests were ‘beyond unreasonable … very intrusive and unkind, it’s inhuman actually’.

Or the woman from regional Victoria who needed to care for her animals, who was worried about having her flock put down because the department had asked for further information it said she did not provide, who told us: ‘I cannot fathom the cruelty of this process and their decision. Surrendering our animals has broken my heart, my spirit and my faith in our state government and the humanity of the people that make such decisions based on fear and not at all on human rights, compassion or justice’.

Other people felt caught up in a bureaucratic nightmare that bordered on inhumane: people whose applications were not processed because they had not submitted a COVID test in time, when they could not plan travel until the exemption was approved; people refused exemptions with no reasons or review process, being told simply to apply again.

Applications were closed as ‘expired’ when they were not processed before the intended travel date had passed, leaving people with no choice but to start the process again.

Between 9 July and 14 September 2021, the Department received 33,252 exemption applications, of which only 8 per cent were granted.

The overwhelming majority were not specifically rejected but ‘closed for other reasons’ – the impact was the same as a rejection.

They could not cross the border. While the actual decisions were not delegated below senior departmental officials, most applications did not get to a decision-maker at all – and although the Directions appeared to provide for broad discretion, in practice, it was exercised narrowly. A departmental entry suggesting that whether someone ‘crossed interstate against public advice’ would be relevant to a decision on their application simply looked punitive.

People were not given reasons for the refusals or an avenue of appeal. It appeared to us that the department put significant resources into keeping people out rather than helping them find safe ways to get home. The whole scheme failed to comprehend the very real need for many people to come and go across the border for a whole range of reasons, even in the face of official warnings.

Our state borders have been porous for over 100 years.

Even in a global health emergency, some people need to cross them, and too many found themselves bereft.

Rather than fairly considering individual circumstances and the risks associated with them, the exemptions scheme was a blunt instrument that resulted in unjust outcomes.

I recognise that the Department of Health was focussed on the safety of people in Victoria, seeking to reduce the risks to public health by severely limiting cross-border contact. But the result was some of the most questionable decisions I have seen in my over seven years as Ombudsman.

Aside from the myriad of cases that should have been cause for compassion, it is difficult to understand how a fully vaccinated person, testing negative to COVID-19, willing to self quarantine on arrival, and able to drive to their destination on one tank of fuel, could pose such a risk to public health to justify refusing an exemption.

Such a narrow exercise of discretion may have been justifiable while a COVID-19 elimination strategy was still being pursued, but it persisted well after this strategy was abandoned toward the end of August 2021.

It is even harder to understand how fully vaccinated Victorian residents just trying to get home could still be subject to such an approach at that time.

At its core, this investigation is about the importance of good administrative decision making. Failing to exercise discretion fairly, not giving reasons for decisions, failing to offer a right of review – these can all damage public trust in those who make decisions, and ultimately, in government.

Getting it wrong will not always result in the torrent of angst and grief we saw in this investigation, but how much could have been spared if more compassion had been shown.

I welcome recent amendments to legislation which provide greater transparency and accountability during a pandemic, but more is needed. Changes to policy and guidance will help. I also encourage the government to publicly acknowledge the distress caused to so many people when discretion was exercised narrowly, or not at all. If there is a next time – we cannot let this happen again.

This is an edited version of the Forward of the just released report “Investigation into decision-making under the Victorian Border Crossing Permit Directions” issued by the Victorian Ombudsman.