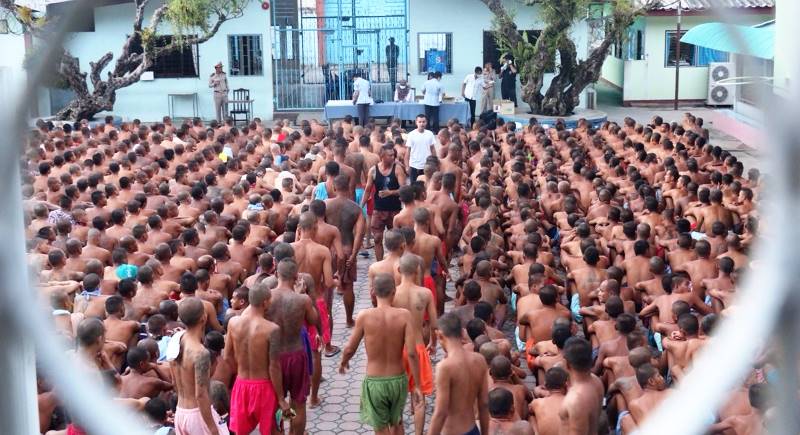 Many books by foreigners about Thailand include romantic or dissolute tales of alcoholism or substance abuse in the enervating heat; accompanied by a colourful caste of local prostitutes, gangsters and police, with virtually all the characters on the take in one way or another.

Others affectionately record the characteristic slippery collisions of morality in the Land of Smiles, also known, perhaps more appropriately, as The Land of Hungry Ghosts.

In what could almost be called a literary sub-genre, still other books document alarming expat experiences in Thailand’s prison
system.

The 1999 book The Damage Done: Twelve Years Inside a
Bangkok Prison by Australian Warren Fellows, recorded how, through a
“labyrinth of chance meetings and bad decisions”, the author was convicted in 1978 of heroin trafficking and sentenced to life imprisonment.

Fellows was certainly guilty of his crime. He worked for years as a drug courier for one of Sydney’s most notorious underworld figures, Neddy Smith, who had close associations with the Australian police of the 1970s.

The days of the Vietnam War, when the CIA was closely linked to the heroin
trade through fronts like Lao Air, may be gone. But until recent years, when
poppy eradication programs and the rise in popularity of methamphetamine made other drugs more financially viable, Thailand was a centre for the world’s heroin.

Fellows was a pioneer in the trade between Thailand and Australia,
which operated with virtual impunity under the protection of senior Thai
generals. In the days of primitive customs controls, the routine was well
established. Couriers from Australia, usually practicing or former addicts
down on their luck and prepared to take the risk, travelled to Thailand, where they met up with a fellow Australian.

They would swallow a kilogram divided into 30 balloons, and catch a return flight. As the years progressed and screening grew more sophisticated, the criminals grew cleverer; sending several couriers through at the same time, and pointing the finger at one of them. While the authorities were busy with the hapless courier who had been anointed the fall guy, the others walked through scot-free.

Fellows, who went to school in Sydney and whose father was a champion
jockey, began his Prologue: “I am going to tell you about the worst thing that
ever happened to me. Think about the most wretched day of your life. Maybe it was when someone you loved died, or when you were badly hurt in an accident, or a day when you were so terrified you could scarcely bear it. Now imagine 4,000 of those days in one big chunk.”

A vivid opening sequence describes the lancing of “an enormous lump” which appeared to be moving on the neck of a fellow prisoner, a Frenchman who would not stop screaming.

“As soon as the blade sliced the skin, the wound opened up like a new flower. And out of the gash in the Frenchman’s neck spilled hundreds of tiny, worm-like creatures, wriggling and oozing like spaghetti. It was appalling, a dreadful dream, only real and right before my eyes, happening to a human being…

“A man who, somewhere, had a mother and a father, family and friends, had been left to become a living nest for maggots… Such visions marked my days like the chimes of a clock.”

Fellows claimed that heroin was readily available in Thai prisons, and that he became addicted, “an outstanding case of poetic justice”.

Interestingly, Warren Fellow’s son Adrian Simon in turn wrote a book about growing up the son of an international drug smuggler, Milk Blood: A father’s choice, the family’s price.

In an interview with the publication The Malestrom Adrian Simon said:

“It’s taken me 40 years to wrap my head around the cost of my father’s crimes. It’s hard enough growing up without a father, let alone shadowed by a man rotting in the Bang Kwang ‘Big Tiger’ prison, in Bangkok. I was two when he was arrested. You know how this goes, a good looking westerner showcased to the world for all the wrong reasons.

“It was a total shit storm. He could have flushed the heroin, been done with it. He could have walked out of the hotel and back to his family in Australia. But he ignored all the warnings signs, greed was set in motion, simple as that. My mother and I were driving to the airport and heard the breaking news on the radio.

“From that moment the shape of my life was mangled. Soon after my mother was hauled away, my extended family ran for the hills, and the whole bloody world shamed us.

“Warren wrote a book called The Damage Done, anyone who has picked up a backpack through Asia has read it. A harrowing tale about hard prison time, which was both surreal and sickening for me to read.

“But one thing was lacking, the bigger picture, the family left behind, and the untold story that so many later in life urged me to share. When my time was right I simply bled out my emotions and history on paper. At the expense of sounding corny, I collected too many varied experiences not to. In a way, I believe it was a planned destiny.”

Escape: The True Story of the Only Westerner to ever Escape from the
Bangkok Hilton, by David McMillan, known for having established the largest drug importation network Australia had ever seen, is better written than many others of its type.

As a child McMillan attended Melbourne’s elite Caulfield Grammar School, and as a 12-year-old became well known in the fledgling television of the 1960s presenting a regular 5-minute news bulletin for
children. His drug smuggling career began with hashish from India.

At his peak, in the mid-1980s, McMillan owned houses and apartments all around the world. In 1982 he was arrested and charged with heroin smuggling, running houses associated with the business in London, Brussels and Bangkok, as well as using multiple false passports.

Released on parole from an Australian prison in 1993, after a close call at
Bangkok’s former international airport Don Muang, now reserved for regional flights, McMillan was arrested and charged with heroin trafficking.

In Escape he records how he watched 600 foreigners in a prison population of 12,000 in Bangkok’s infamous Klong Plem prison, aka the Bangkok Hilton, falling prey to disease, violence and despair.

Financially better off than most of his fellow inmates, McMilan had his own chef and servants. For others, up against the brutality of the Thai justice system, death appeared to be their only way out.

McMillan, also likely to be given a death sentence if his case ever reached trial, resolved that this would not be the end for him. He escaped in 1996 in
circumstances Australia’s future Attorney General Robert McClelland
described as “really quite an achievement”.

McMillan was subsequently rearrested in 2012 in Britain as part of an
investigation into the importation of heroin from Pakistan.

Many of the foreigners meshing with Thailand’s drug trade are so-called
“drug mules”.

The mules may be judged guilty of moral turpitude, naivety, desperation,
stupidity or greed. Some should be classified not as perpetrators of drug trafficking, but as victims of human trafficking, according to the International Organisation on Migration’s criteria for trafficking, which includes coercion or trickery, transportation and exploitation.

Sandra Gregory’s Forget You Had A Daughter: Doing Time in the ‘Bangkok
Hilton’ is one of the few to be written by a woman. She recounts how she went from having a successful life in Bangkok that included friends, two teaching jobs, and her own apartment, into a Thai prison.

Gregory’s life took a terrible turn when she ran out of money while recuperating from dysentery and dengue fever. With mounting medical bills to pay, she met a heroin addict who offered her $1,000 to smuggle his personal supply of heroin to Japan. It was just enough to pay her medical bills and buy a ticket home, but Gregory was arrested at Bangkok airport before she even boarded the plane.

Forget You Had A Daughter details the four and a half years she spent in prison. She tells of her daily fight for survival, of many women who
died with no medical care or loved ones around them, and of her acceptance of her guilt and ultimate redemption.

Sandra Gregory was just one of the many small time mules who, out of their depth and given up by drug smugglers as decoys, find themselves in
a Thai jail.

Bertil Lintner, an expert on the global narcotics trade, says the syndicates recruited several “mules” at a time to carry varying quantities of narcotics. They designated one or two as “decoys or sacrifices” who would be
arrested by airport customs after a “tip-off” from the syndicates.

Meanwhile, mules carrying larger consignments slip through undetected: “Usually the ones with the smallest amounts get nabbed. The numbers look good for the Thai government’s war on drugs and the risk factor is profitable for syndicates because the higher price of the drugs is maintained.”

This is an extract from the book Thailand: Deadly Destination by John Stapleton.