Like Trying to Find the Door in a Dark Room: Tasmania’s Whale Stranding Tragedy 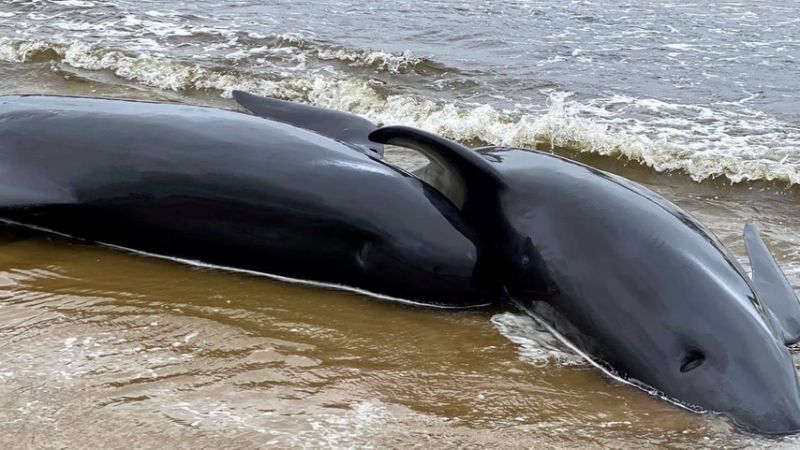 Yesterday, more than 250 pilot whales were reported to have stranded, with one-third presumed dead. And this morning, rescuers found another 200 pilot whales stranded up to ten kilometres away from the first group — most are likely dead.

This brings the total number of stranded pilot whales in Tasmania to more than 450, and it’s believed to be the biggest ever recorded in the state. The Greens are calling on federal Environment Minister Sussan Ley to launch a national response.

The rescue mission aims to refloat the pilot whales that appear to still be in reasonable health. But their behaviour hampers rescue efforts: many pilot whales re-strand themselves to be with their family. This event likely means a number of generations of the local population will be lost.

How did they become stranded?

Despite its name, the long-finned pilot whale is actually a large oceanic dolphin. They cover vast areas of the Southern (Antarctic) Ocean, reaching between four and six metres in length and weighing up to one tonne.

They are well adapted to deeper oceans where they hunt for various species of squid in depths of between 600-1,000m, using echolocation to find their prey. Echolocation is a way of using sound to navigate in complete darkness.

They generally spend most of their lives offshore and it’s not well understood what conditions drive them close to shore, and to enter shallow embayments.

Some theories suggest food shortages are to blame, or changes in electromagnetic fields that disorient them. They may also be following a sick or distressed pod leader. And in some past cases strandings were related back to active sonar from ships and naval sonar interrupting their echolocation.

But once in shallow waters, it’s difficult to swim back out. As these whales mostly navigate with echolocation it’s not possible for them to use sonar effectively in shallow and muddy embayments.

It’s extremely distressing for the whales, a lot like trying to find the door in a dark room while hearing your relatives scream for help.

In fact, the stress is what many die from in the end. Other causes of death are overheating from sun exposure and drowning if they can’t move their bodies up to breach the surface in shallow water.

There are a number of strategies to refloat whales. In Macquarie Harbour, rescuers are using slings to tow the whales to deeper water, before releasing them.

Other options include multiple people pushing them off the beach during high tide into deeper water.

In this case, albeit potentially dangerous for the helpers, people power can make a big difference. After all, time is of immense importance for success, and to stop more whales beaching.

However, chances of survival plummet with long exposure to sun and extended periods of stress. What’s more, Macquarie Harbour is relatively remote and difficult to access, further complicating rescue efforts.

But the biggest obstacle rescuers face is the whales’ social bonding. Long-finned pilot whales are highly intelligent and live in strong social units.

So when dealing with mass strandings, it’s important to realise the emotions and bonding between the whales are very likely beyond what humans can feel. One well-documented example of their emotional depth is the pilot whale seen carrying its dead calf for many days. https://www.youtube.com/embed/0a8HGJid-Jo?wmode=transparent&start=0 Mother pilot whale grieves over her dead calf.

This makes the stranding process extremely complex, as it unfolds over several hours to several days — the whales don’t all strand at the same time.

We know from killer whales, which also have strong social bonding, that if a close member of the group strands, others will attempt to join to die together.

Read more: We need to understand the culture of whales so we can save them

The situation for pilot whale pods can be similar, but more complex as a result of having much larger pods. Pilot whale pods have multiple sub-units, which can consist of friends as well as family and they don’t have to be genetically related.

Social units get mixed up when they’re in shallow bays. This means individuals can become disconnected from their social units before the actual stranding occurs, causing stress and confusion prior the beaching.

There are an estimated 200,000 long-finned pilot whales in the Southern Ocean and Antarctica, but mass strandings like this can have a profound impact on sub-populations.

Many similar sad events occured in New Zealand: hundreds of long-finned pilot whales stranded in 2018 and 2017, and the majority died.

To make matters worse, studies suggest the long-finned pilot whales in the Southeastern Pacific have low genetic diversity. There are similarities between this species found in Chile and New Zealand, but with surprisingly distinct differences between New Zealand and Tasmania.

Considering they can live up to 50 years and the fact only few survive when multiple generations strand, such events not only destroy entire generations but also remove them from the gene pool.

This puts local populations at further risk. Inbreeding is one consequence, but the biggest problem is their decreasing general fitness and ability to adapt to changes.

In the past, significant numbers of stranded whales have been successfully released, making it worth the effort. For example, in one of largest mass strandings in New Zealand in 2017, volunteers helped about 100 whales refloat, and made a human chain to try to stop them restranding.

Read more: It’s time to speak up about noise pollution in the oceans

Still, such events are likely to be more frequent in the future due to changing ocean conditions and increasing human activity such a noise pollution, commercial squid fisheries and deep sea mining.

Climate change shifts ocean currents as sea temperature rises. And with this, squid availability will change. A lack of food offshore can cause stress and drive them closer to shore.

We can help the whales not only by actively supporting rescue organisations such as ORRCA, but also by helping reduce carbon emissions, foster sustainable fisheries, reduce plastic pollution and advocate for marine sanctuaries.