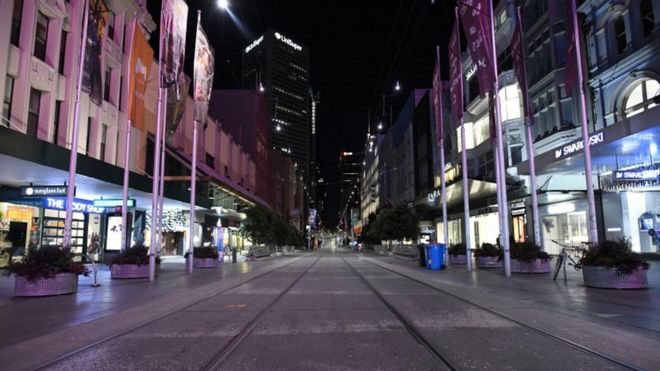 The debate over Australia’s harsh lockdowns has turned.

From the beginning the cognoscenti, if you wish to call them that, did not climb on board, much less rally behind the flag. But the masses thought otherwise.

Anyone who didn’t agree with the lockdowns soon learnt to keep their mouth shut.

The public queued to surrender their freedoms. Politicians queued for their television spots.

Now the tide has turned.

In the last few days both academic and mainstream publications have come out in scathing opinion pieces on lockdowns.

Well known columnist at Sydney’s mass circulation The Daily Telegraph Joe Hildebrand wrote: “We tell ourselves that times of crisis unite us – the corona crisis even has its own slogan: ‘We’re all in this together.’

“But they don’t and we’re not.

“Prime Minister Scott Morrison brought all state and territory leaders together in an effort to forge a consistent approach to tackle the pandemic. But the fig leaf almost immediately fell away from the fire hose… States executed wave after wave of shutdowns and lockdowns that went beyond the official National Cabinet advice while the Federal Government footed the bill for the masses of job losses that ensued.”

Senior editor at The Australian Adam Creighton has written a series of well argued and prominently placed stories questioning lockdowns. He queries the role the media have played in fueling the biggest erosion of civil liberties in our history, and “a recession whose long-term impacts can only be guessed with trepidation”.

“If social media is any guide it is our intelligence, rather than health, that has been dealt a heavier blow by the coronavirus pandemic and the vested interests that benefit from it.

“Young people should be far more worried about the collapse in education, their inability to travel and enjoy their lives, and their highly diminished job opportunities.”

The recent report by the conservatively aligned Centre for Independent Studies also signified a major shift from the government’s own side of politics. They’re eating themselves.

The smaller journals are also unequivocal in their hostility to lockdowns.

James Delingpole at Spectator Australia asked when we turned into such a sorry bunch of cowards, snitches, collaborators, surrender monkeys and whipped curs? This is a question he’s been asking with increasing frequency as the Coronavirus pandemic — or rather the authorities’ crazed overreaction to it — has got more and more insane.

“Sure I can understand at the beginning why people might have been nervous, when information was scarce and rumours were rife. But there’s really no excuse now.

“We know that Covid-19 is unlikely to kill you unless you were on your way out anyway; that there are effective treatments; that lockdowns probably cause more deaths than they save; that we’re well on the way towards ‘herd immunity’; that the Swedish model was the right one. So how is it that so many people remain convinced that this is our Spanish Flu and that no government measure, however draconian, is too extreme or intrusive to combat it?

“Victoria, as you know, has gone further than most by implementing curfews, roadblocks, random, warrant-free house searches. On TV, police commissioner Shane Patton — in his natty all-black uniform — actually boasted that his officers had been smashing car windows and pulling out the drivers if they failed to answer questions about whether their journey was strictly necessary.”

Augusto Zimmerman in the less populist and more academically inclined Quadrant is equally as scathing, arguing the evidence suggests the economic destruction they bring is worse than the virus, with large numbers destined to die because of the lockdowns and as a consequence of restrictions and enforced closures that are gutting the economy.

“On August 2, Victorians began living under a “state of disaster” that has seen some of the world’s most severe restrictions imposed on its citizens and their fundamental freedoms.

“Leaving home after 8pm is banned with hefty fines imposed on those pulled over by police, who now represent the only cars on the road after dark.

“There are roadblocks to prevent citizens from moving interstate or, much closer to home, more than the permitted 5km from their listed addresses.

The Victorian government has effectively become an elected dictatorship.

“And the irony as Melbourne is transformed into Tumbleweed Town is that lockdowns actually don’t work.”

There has long been intellectual weight behind anti-lockdown views and sentiment, including most notably Dr John Ioannidis, Co-Director of the Meta-Research Innovation Center at Stanford University, .

In the Australian context distinguished academic Professor Ramesh Thakur of the Australian National University has been the most outspoken and most coherently argued.

You can see some of his work by clicking here.

In his most recent piece, in The Japan Times, where he is a contributing writer, Thakur argues that Coronophobia is more deadly than the Coronavirus.

“Last month, a study of 50 countries in the top medical journal Lancet confirmed most of this. COVID-19 mortality correlates more with obesity rates than lockdowns, while movement restrictions and border closures lowered cases without saving lives.

“Dr. Maria Van Kerkhove, head of the WHO’s emerging diseases unit, advises against reimposing national lockdowns owing to health, social and economic downsides. Is this an implicit admission lockdowns were wrong in the first place?

“The pandemic was initially declared with little existing science based knowledge of its emergence, growth, curve and retreat. Panicked governments imposed hard lockdowns in a cascading rush, forcing people to live virtually in a state of terror.”

The tumult and the shouting will not die down.