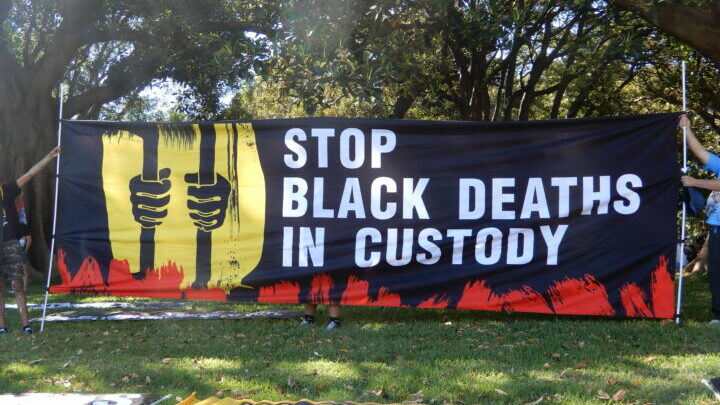 “This shows how our government facilities and systems will treat you if your skin colour is black,” declared Dunghutti activist Paul Silva at the 10 April Stop All Black Deaths in Custody Rally in Sydney. “They thrive on systematic racism and it’s killing our people.”

Just like African American man George Floyd, Dungay called out that he couldn’t breathe over and over until it was no longer possible. But the 26-year-old Dunghutti man didn’t have a knee on his neck, rather he had multiple officers pressing on his back as he was held down in the prone position.

As he addressed the crowd in Djarrbarrgalli-the Domain, Silva was referring to the NSW DPP and SafeWork NSW having rejected his family’s 2020 request to open a criminal investigation into the killing of his uncle David Dungay Junior at the hands of Long Bay prison guards in December 2015. 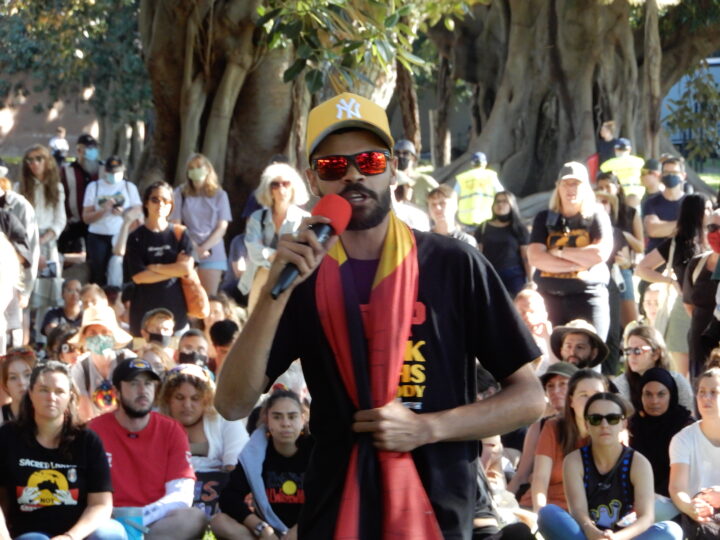 David’s death is one of at least 474 First Nations custody deaths since the Royal Commission into these fatalities tabled its report on 15 April 1991. The rally was marking its 30th anniversary, as well as the current vision for change, which has intensified since last June’s Black Lives Matter uprising.

“Instead of killing us out in mass numbers,” Silva continued, “they’re killing us behind closed doors because they know the government will allow them to get away with the brutality and killings of First Nations people in custody.”

As she opened the rally at Sydney Town Hall, Gumbaynggirr Dunghutti Bundjalung woman Elizabeth Jarrett noted that while many that morning had been discussing the death of Prince Philip, the silence surrounding the recent five Aboriginal deaths in custody within a month was deafening. 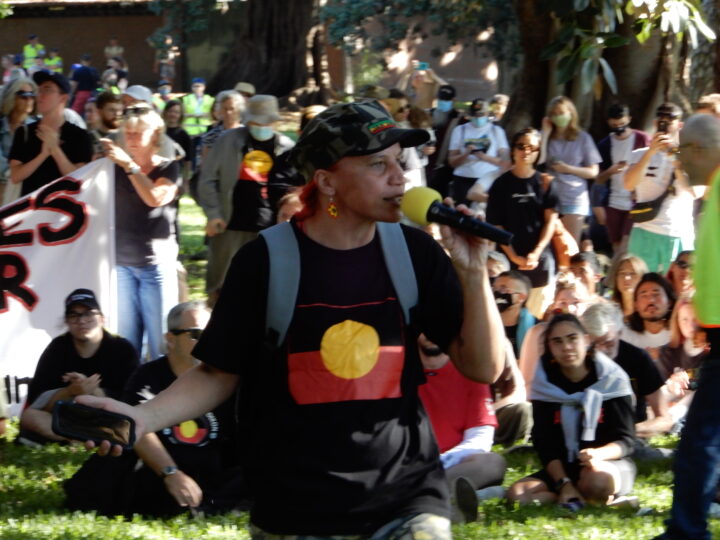 Elizabeth Jarret MCing at the rally

And while all of these deaths have been condemned, one stood out for particular consternation as it involved a 44-year-old Aboriginal woman taking her own life by hanging, despite the 165th Royal Commission recommendation stating hanging points should be removed from all cells in 1991.

Established in 1987, the national inquiry into First Nations custodial deaths handed down 339 recommendations, most of which have never been implemented. However, these overlooked reforms often resurface as issues within the findings of coronial inquiries.

While marking the three decades since the commission, the rally was also a march of anticipation, as the NSW parliamentary inquiry into First Nations overincarceration and custodial deaths is set to table its report with a fresh set of recommendations on 15 April this year.

Having initiated the new inquiry, NSW Greens MLC David Shoebridge noted at the 2021 Invasion Day rally that if it wasn’t for the tens of thousands who mobilised in support of Sydney’s 6 June 2020 Black Lives Matter rally, he wouldn’t have been able to convince parliament to establish it. 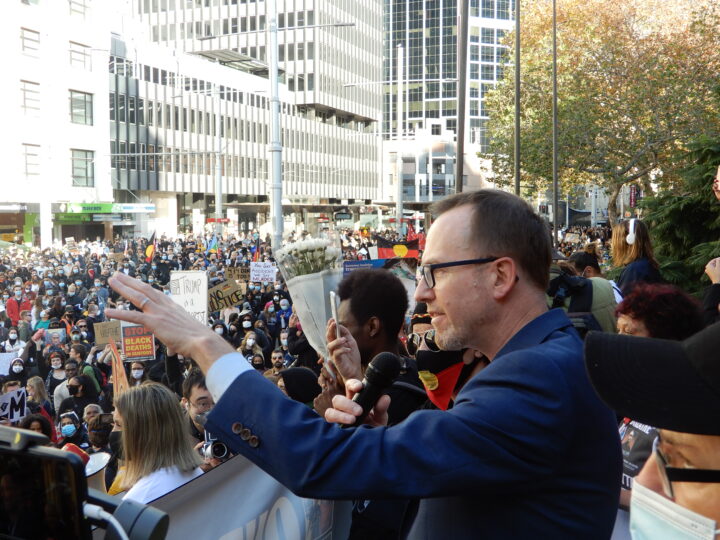 The math is not that simple

As First Nation’s custodial deaths have received a heightened focus over the last ten months, there have been a lot of comments appearing on social media along the lines of, why are we talking about Aboriginal deaths in custody, when there are more non-Indigenous custodial deaths?

So, Sydney Criminal Lawyers would like to take a few inches to address these assertions.

The National Deaths in Custody Program outlines that over the financial year 2018-19 there were 89 deaths in the custody of either police or corrections. And of these 73 were non-Indigenous, while 16 were First Nations.

However, these figures taken alone fail to tell the full story.

The 2016 Census found that Aboriginal and Torres Strait Islander peoples represented 2.8 percent of the nation’s overall population. Of the 24 million people living on this continent, just over 649,000 are First Nations people. And custodial deaths are making a deep impact on this small population.

“These deaths aren’t invisible to our communities. They are highly visible,” Dr Chelsea Watego told the ABC last week. The academic also noted that the system disproportionately locks up First Nations people for matters that non-Indigenous people often aren’t imprisoned for. 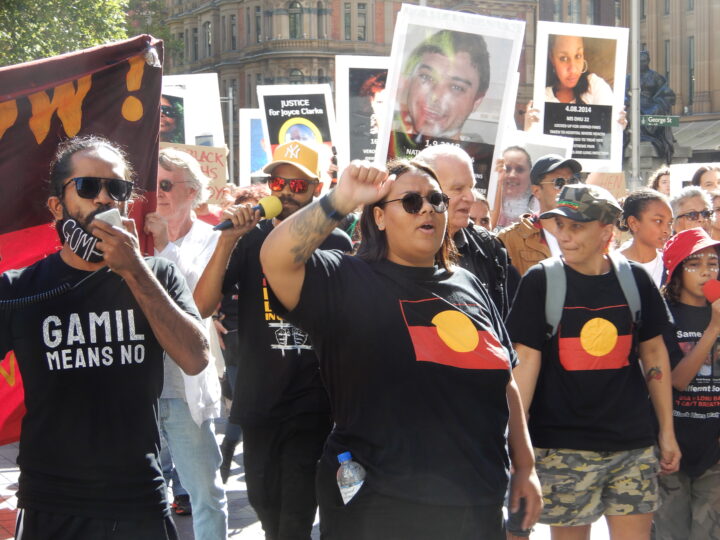 The March for Justice

This systemic bias leads to stark overrepresentation in the prison system. ABS custody statistics for December 2020 reveal that First Nations people – less than 3 percent of the nation’s total population – account for 29 percent of its adult prisoner population.

As well, Indigenous people enter into a prison system run by the invading force. A history of colonialism continues to see Aboriginal people brutalised and discriminated against on the inside. And the prison system all too often neglects their health needs.

Indeed, Aboriginal and Torres Strait Islander inmates are treated differently to the rest of the prisoner population. Just watch the footage of the treatment David Dungay Junior, Wayne Fella Morrison or Ms Dhu were all subjected to in detention.

At last Saturday’s rally, the message was clear: too often are First Nations people entering the police and prison systems and coming out in body bags. And no one is ever held to account.

Uncle Dave Bell brought the Stop Black Deaths in Custody march to a halt at the Sydney CBD intersection where College Street meets Prince Albert Road. And the Wiradjuri elder had the mass of protesters repeat the names of Aboriginal people who have lost their lives in custody. 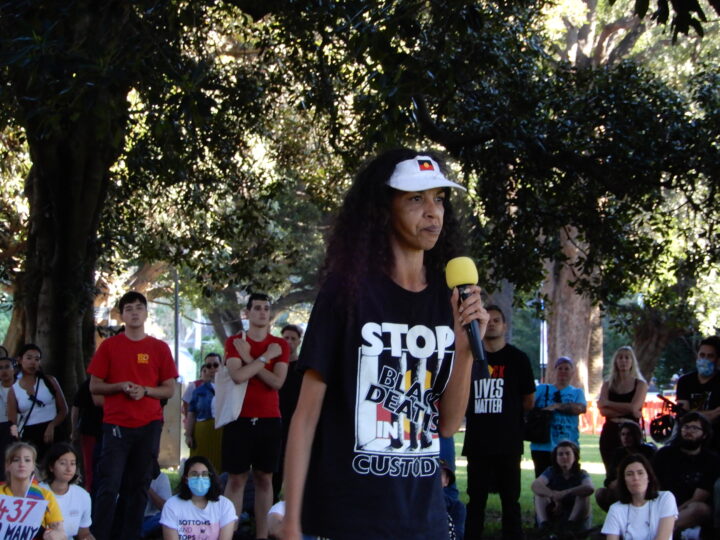 In addressing the crowd late in the day, FISTT (Fighting in Solidarity Towards Treaties) spokesperson Gwenda Stanley asserted that there ought to be more discussion around Royal Commission recommendations 334 through to 338, as these address sovereignty, treaty and land rights.

“How do you expect to heal, and our country to heal, when you keep removing and forcing us from Country?” the Gomeroi woman asked.

The recommendations Stanley pointed to set out that all jurisdictions should address the land needs of Aboriginal people, with unalienated Crown land being handed over to those who have a claim, so they control it. This should also be done with former Aboriginal reserve and mission land.

Where land can no longer be handed over due to the effects of colonisation, then land needs should be met via other means, including the provision of adequate funding. And recommendation 335 recognises that until land title is forthcoming, First Nations standards of living won’t improve.

“It is now time to start paying for the war crimes in this country.”