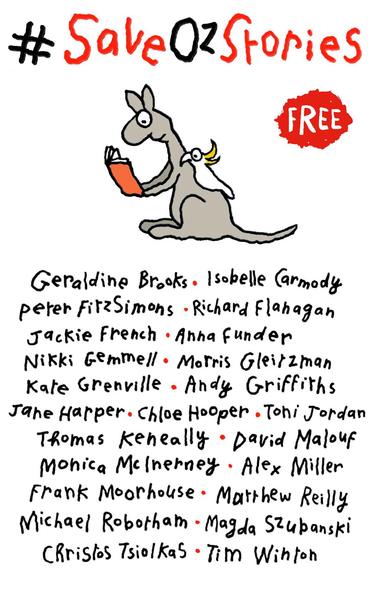 #SAVEOZSTORIES IS AVAILABLE FOR FREE IN BOOKSHOPS OR FOR A COMPLIMENTARY DOWNLOAD GO TO THE MELBOURNE UNIVERSITY PRESS WEBSITE: HERE:

Save Oz Stories is a collection of responses from some of the country’s most highly regarded writers, including David Malouf and Geraldine Brooks, to an Australian Productivity Commission Report which recommends changes to copyright and importation rules which will effectively destroy the $2.2 billion Australian book industry.

It adds to a long list of attacks by the Abbott/Turnbull conservative governments on journalism, whistle blowers, actors, artists and writers; essentially on all independent thought and creativity in a once proud, freedom loving country.

The totalitarian instincts of the current Australian government defy belief.

The Abbott and now Turnbull Government’s record drips with a contempt for writers and writing that leaves me in despair. They want to thieve our past work, and, by ending parallel importation restrictions and territorial copyright, destroy any future for Australian writers.

Just one highly revealing quote from the Productivity Commission:

The expansion of the book production industries over recent decades has attracted and held productive resources, notably skilled labour and capital, that have thereby been unavailable for use in other industries. The upshot will have been reduced growth in employment and output in other parts of the economy.

Replace the clumsy phrase ‘book production industries’ with the word ‘kulak’, and you would have ideological cant worthy of Stalin.

What they are saying is that without the book industry—which is nothing more than a parasite—the economy would be doing far better. We could all be helping the economy doing real work like, well, being unpaid interns for merchant bankers.

The report’s proposals, which even before seeing them the Turnbull Government agreed to endorse, effectively extinguish the Australian book industry as we know it and deliver our market to American and British publishers. Be under no illusion: they want to destroy this industry. And with it, Australian literature.

Vassals of an outdated ideology unrelated to the real world, they can, when questioned on this issue, only mumble neoliberal mantras that have delivered the world economic stagnation, rising inequality and global environmental crisis. Hollow men, stuffed men, their words rats’ feet over broken glass. The only thing these people read are the Panama Papers to see if their own name has cropped up.

This decision to destroy the book industry by removing parallel import restrictions is consistent with the government’s relentless . . . attacks on thought and debate. Who benefits from ignorance and silence other than the most powerful and the richest?

The democracy of thought and discussion that books make possible, the possibility of empathy that books are known to engender, the sense of a shared humanity and the transcendent possibilities that books give rise to, all will be diminished by this profound attack on Australian writing. And we will have returned to being what we were fifty years ago: a colony of the mind.

You have to ask if, at heart, this is not profoundly political, because the disenfranchisement of the imagination is ever the disempowerment of the individual. There is, after all, both a bitter irony and a profound connection in a government that would condemn the wretched of the earth as illiterate, while hard at work to rob its own people of their culture of words.

This government, which again, and again, has brought Australia only global shame with its follies of cowardice and cruelty has no right now to destroy such a good in our nation as this: the voice of our experience, the words of our people, the tongue of our hope—our culture of writing.

This is a government that despises books and views with hostility the civilisation they represent.

In this time of fracture we need more than ever the things that can bring us together as a people, not fear, not the resentments of the many, carefully cultivated to cloak the privilege of the few, but the hope of a society that might discover in books the liberating possibility of a shared humanity. Of a better future. Together

For over four decades Australians have had the pleasure of reading stories about ourselves written by successive generations of original and creative Australian writers. However, it is not by chance that we now have our own literary culture. Once upon a time, publishers sitting in offices in London or New York decided what we read and when. Since the 1970s an ecosystem has developed to ensure Australians read Australian writers. Those writers have been nurtured by modest grants, publishers with an appetite for risk, enthusiastic editors, world-class designers, dedicated local printers and passionate booksellers.

Every industry must confront change, every business needs to be flexible. The book industry is a case study in innovation, from the invention of the printing press in the fifteenth century to books delivered direct to mobile devices in the twenty-first century. The Australian book industry has collectively created a flourishing, authentic literary culture, which proudly tells our stories to readers here and abroad. The invention of a global marketplace has enabled our writers to find international as well as local readers. But this happy circumstance is a direct result of that very specific and local ecosystem that enabled writers to develop and attract readers over a succession of books. Overnight success is the exception, not the rule.

So #SaveOzStories invites Australian readers into the experience of our finest writers as they argue in defence of the local book industry. It matters because it is unacceptable for the next generation of children to be deprived of stories in which they can recognise themselves, it matters because writers and writing are fundamental to a civil society…

#SAVEOZSTORIES IS AVAILABLE FOR FREE IN BOOKSHOPS OR FOR A COMPLIMENTARY DOWNLOAD GO TO THE MELBOURNE UNIVERSITY PRESS WEBSITE: HERE: