A KINGDOM IN CRISIS: THE ROYAL SUCCESSION AND THAILAND’S STRUGGLE FOR DEMOCRACY 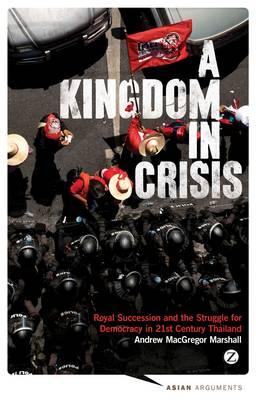 Banned in Thailand, A Kingdom in Crisis: Royal Succession and the Struggle for Democracy in 21st Century Thailand is essential reading for anybody wanting to know what is happening in 21st century Thailand, and what the future holds. With the Thai King in failing health, Thailand stands at a defining moment in its history, struggling to emerge from a despotic past, and convulsed by an intractable conflict that will determine its future. Scores have been killed on the streets of Bangkok. Freedom of speech is routinely denied. Democracy appears increasingly distant. Long dreaded by Thais, the death of King Bhumibol Adulyadej is expected to unleash even greater instability. Yet in spite of the impact of the crisis, and the extraordinary importance of the royal succession, they have never been comprehensively analyzed, because Thailand’s draconian lese majeste law has silenced most discussion – until now. Veteran foreign correspondent Andrew MacGregor Marshall is the only journalist covering contemporary Thailand who has taken the decision to break Thai law and tell the whole story. In this book he provides a comprehensive explanation that makes sense of the crisis for the first time, revealing the unacknowledged succession conflict that has become entangled with the struggle for democracy in Thailand. Besides shedding light on Thailand’s divisions, Marshall provides the only detailed discussion of the looming succession available in the public domain.

Reviews have been extremely positive: ‘An explosive analysis that lays bare what the Thai elite has tried to keep hidden for decades. A clear-eyed view of what is really at stake in Thailand’s continuing turmoil.’ David Streckfuss, author of Truth on Trial in Thailand: Defamation, Treason, and Lese-Majeste. ‘A timely and highly readable account of the grim political reality of the “Land of Smiles”. An essential primer for every visitor.’ Joe Studwell, author of Asian Godfathers and How Asia Works. ‘Andrew MacGregor Marshall has written perhaps the best introduction yet to the roots of Thailand’s present political impasse. He explains how an aspect of the crisis whose importance many analysts in Thailand and overseas have an interest in minimising–the looming succession in the Thai royal family–is in fact central. A brilliant book that could perhaps have been written only by somebody who knows Thailand so well he knew he had to leave the country to write it.’ Simon Long, Banyan Columnist, The Economist ‘Finally someone says the unsayable. A must-read for observers of Thai politics’ Pavin Chachavalpongpun, associate professor at Centre for Southeast Asian Studies, Kyoto University ‘A brilliant, incisive rewriting of Thailand’s history and monarchy. An instant classic that promises to permanently change the conversation, both inside and outside the country.’ Christine Gray, anthropologist and pioneering analyst of Thailand’s monarchy.

A recent piece in The New York Times records:

After nearly seven decades on the throne, King Bhumibol Adulyadej, 87, the keystone of Thailand’s identity and a major unifying force for the country, is in declining health. With increasing frequency, the palace has issued medical bulletins detailing his ailments, and in recent days his youngest daughter has led prayer sessions following a Buddhist rite normally used for terminally ill patients.

Worries over the king’s health have cast a pall of anxiety across the country, which has one of the worst performing economies in Asia and is ruled by a military junta that seized power last year.

While reverence for the king was once the only thing that this fractured country could agree on, today the future of the Thai monarchy is uncertain.

The king’s heir apparent, the jet-setting crown prince, has a reputation as a playboy and faces an uphill battle to win the trust and adoration his father has achieved. Many Thais hoped that Princess Sirindhorn, the crown prince’s sister, who has won hearts through her charitable causes and dealings with the poor, might succeed her father, but palace law bars women from the throne.