How Morrison Taught Australian Voters to Relax and Love the Rort 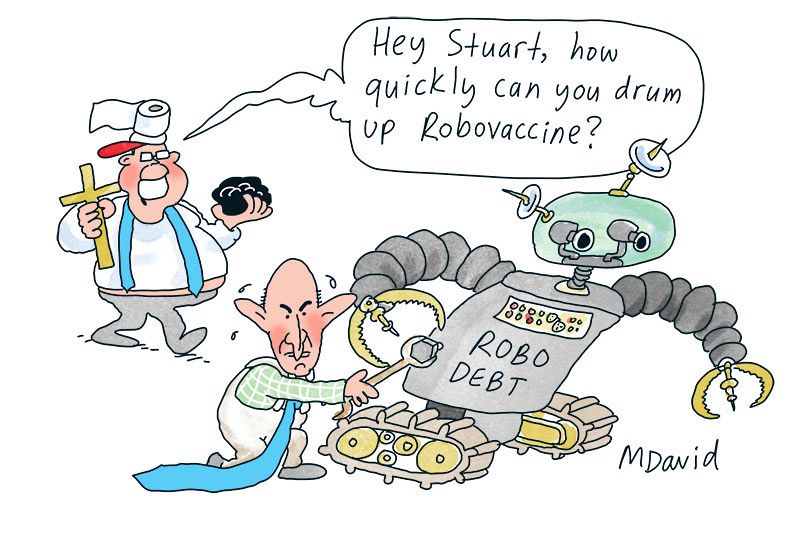 It is hard to escape the conclusion that the Australian people are being actively groomed by conservative politicians to accept, dismiss, overlook, or ignore their unethical activities.

In fact, corruption scandals involving conservative Australian politicians are so plentiful and out-in-the-open these days, many Coalition MPs don’t even bother to deny them.

At an inquiry into the allocation of bushfire fund relief, Barilaro professed outrage that buying votes using taxpayers’ money had somehow gotten a bad name:

[I’m] sick to death of the mistruths spun about pork barrelling.

The Deputy Premier told the Committee he was proud to buy votes using public money:

… What we call pork barrelling is investment … I dare you to turn up to these communities and tell them why they don’t deserve these projects.

In one way, Barilaro is right — most people would welcome more help for their communities.

However, when such grants are legislated to be merit-based, officials who award them to projects adjudged to be less worthy than others is prima facie criminal conduct. Perhaps if the NSW ICAC had not been hobbled by the previous Baird Coalition Government, in 2015, because too many Liberal MPs were losing their jobs after facing it, John Barilaro might be less forthcoming about porking Coalition seats.

Although, by lauding the NSW Government’s targeted slush fund strategy, Porky was in fact only following the lead of his boss, Premier Gladys Berejiklian. A boss who had, admittedly, been constantly embroiled in scandal since reaching office, including her conducting a clandestine affair with an MP she had just sent to the crossbenches for alleged corruption.

Berejiklian spoke in similar terms to Porky Barilaro on 26 November last year, after it was revealed that, prior to the previous NSW election, a $252 million “Stronger Communities” fund had been overwhelmingly awarded to Coalition-held seats and that only Coalition MPs had been consulted.

In her typical lachrymose fashion, Berejiklian ruefully admitted her Government had misused public funds — but said that was okay, because everybody did it:

… It’s not an illegal practice. Unfortunately, it does happen from time to time by every government.

This defence does make IA wonder why her office went to the trouble of shredding and deleting all their documents relating to the fund.

Berejiklian concedes $140m grant scheme was pork-barrelling, but says 'it's not unique to our government' https://t.co/NsWqnaHGrY

Of course,  corruption is not unique to any side of politics. But whether all governments do conduct themselves in such an openly self-interested fashion is very open to conjecture. Nevertheless, Prime Minister Scott Morrison recently described NSW as setting “the gold standard” in Australian governance.

And in line with the new NSW standard, pork-barrelling and other forms of graft have grown at a heady rate under the Morrison Government. At a rate directly proportional to the decline in ministerial accountability. Because, despite the Government enduring a host of grubby scandals far too numerous to list here, no Morrison MP is ever found to be corrupt enough to be sacked by him. On the contrary, several corrupt ministers sacked under previous leaders, such as Stuart Robert and Sussan Ley, have regained their places in the cabinet under the rorter-friendly Morrison administration.

Under Morrison, when ministers are asked an awkward question, they will invariably “reject the premise of the question”, call it “fake news”, or “conjecture”, or maybe an irrelevant confection dreamed up by the putative “Canberra Bubble”. Just before abruptly ending the press conference and scurrying away, smirking.

Federal Health Minister Greg Hunt, for example, has long taken a smirkful pride in his skill at deflecting questions stemming from the tediously frequent reports of his alleged incompetence and/or malfeasance.

For instance, when the sports rorts scandal was in full swing last year, a video emerging of him being thanked by a yacht club in his electorate for “working behind the scenes” to secure them a grant. Hunt baldly denied his actions were in any way improper. And when the interviewer attempted to follow up the question, Hunt simply spoke over him and filibustered for two or three minutes until the ABC had to end the interview.

A Facebook video shows a yacht club treasurer in @GregHuntMP's electorate thanking him for the “work behind the scenes” securing just over $170,000 from the controversial sport grants program.@paulwkennedy asks the Minister what that meant. pic.twitter.com/JY4drNgV8y

Perhaps emboldened by Porky and Goldie in NSW, yesterday morning on ABC News Breakfast, in an interview with presenter Michael Rowland, Hunt took his brazen disregard for democratic processes to an entirely new level.

When presenter Michael Rowland asked Hunt why he had placed a Liberal Party logo on an announcement that the Australian Government had secured 10 million new doses of the Pfizer COVID-19 vaccine, Hunt displayed enviable chutzpah.

First, the Health Minister denied he had done anything wrong by sticking the Liberal logo on a Government announcement.

I’m a very proud member of that party with a great heritage and tradition in Australia and that’s part of the Australian democratic process.

There’s no problem with identifying entirely appropriately within the rules. The origins and heritage of that banner under which we were elected by the Australian people.

Then, after the interviewer asked whether the Liberal Party had paid for the vaccines, Hunt had the audacious effrontery to spend the rest of the interview accusing Rowland of bias:

HUNT: “I know this is an issue for you. In many ways, you identify with the Left.”

ROWLAND: “No, no, minister, I find that offensive.”

HUNT: “Come on, Michael. There’s nobody who’s watching you that don’t identify you as the Left. You should be open about that. I’m open about my origins … I did predict to people that Michael Rowland would spend 50 per cent of this interview on this topic.”

The core of her message was that “integrity in politics matters … to the health and strength of our democracy”.

Keneally went on to say that democracy suffers when corruption is seen by the electorate as the normal state of affairs:

I’ve been in politics long enough to know there is a view out there that grift and graft and dodgy deals with donors are just par for the course, the nature of the beast, the cost of doing business. “Factored in” by voters, because “all political parties do it’”and all politicians are in it for themselves.

But …. when corrupt acts go unpunished. When they’re ignored, or worse, rewarded. When there are seemingly no consequences for gross incompetence and no penalties for scandalous negligence — that’s what undermines belief in the system and respect for the institution.

Have we now reached the point where public apathy about political corruption and graft is so complete, politicians don’t even need fear admitting their involvement?

We have all heard the following statements from our friends or colleagues when we bring up corruption by politicians: “They all do it!” and “Both sides are as bad as each other!” and “That’s just politics!”.

What we haven’t heard before is corrupt politicians openly admitting crimes without fear of retribution, because they calculate that neither the authorities nor enough voters care.

As Keneally said at the NPC:

It is much easier for a politician like Scott Morrison to serve his own political purposes if Australians have low expectations and cynical views of their Government.

And if not enough voters care, maybe they won’t care if one side of politics takes complete control and democracy dies.

Beware Australia. You are being groomed — with diabolical intent

We need a Federal Independent Commission Against Corruption. Now.

This is an abridged version of an editorial originally published as part of the Independent Australia weekly newsletter. You may read the full version of this article online in the IA members-only area.

The story is republished in A Sense of Place Magazine with their kind permission.