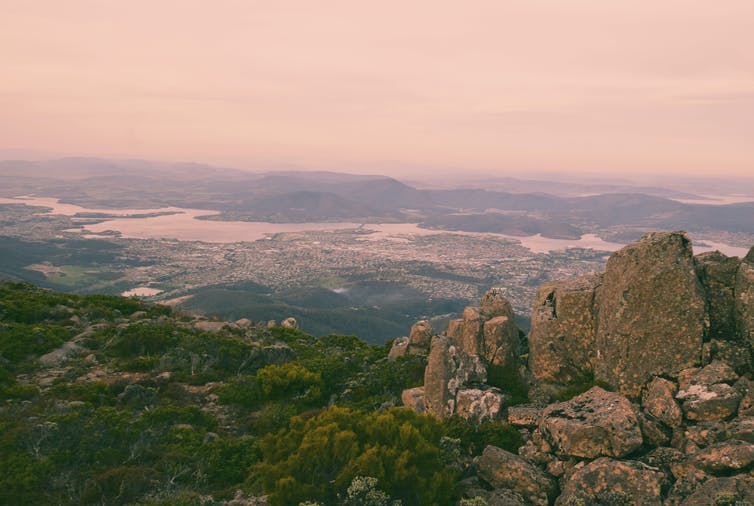 The Living Sea of Waking Dreams, Richard Flanagan’s eighth novel, is one of a slew of novels one expects to emerge from the shadow of the 2019–2020 bushfire season that darkened the skies of eastern Australia for weeks on end, scorching forests from Byron Bay to Kangaroo Island.

A rolling incineration of large swathes of the continent, the sky itself seemed to have been on fire, from the uncanny pink-disk sun of smoke-choked Sydney in November and December to the apocalyptic scenes at Mallacoota on New Year’s Eve.

In Flanagan’s novel the collapse of the planet’s ecosystems happens in the background. The story itself is mainly occupied with something which must be trivial by comparison: the dying of 87-year-old Francie in a Hobart hospital.

Francie’s three children have come together to deal with the demands of the situation. While Anna and Terzo have long left Tasmania behind them (or so they thought) for high-flying careers on the mainland, Tommy has remained. Tommy is a failed artist and speaks with a stutter that appeared when a fourth child, Ronnie, died by suicide following abuse suffered at a Marist boys’ school.

The novel mainly follows Anna. A successful architect living in Sydney, she reluctantly answers Tommy’s call to return to Tasmania when their mother’s health turns for the worse. The novel traces the breaking down of all the things Anna has put up to convince herself she was no longer in that place.

What place? Not Tasmania, but the invisible, traumatic centre of family life — all the failures, evasions, dirty compromises swept under the carpet only to reappear with surprising exactitude each Christmas.

Or, when a parent dies.

Losing a mother; losing a world

In this respect, Flanagan’s novel resembles Jonathan Franzen’s The Corrections or HBO’s Succession.

While Succession, with its ageing mogul patriarch Logan Roy, is loosely based on the Murdoch dynasty, it does not really depend on a media empire at stake. Its heart is the tawdry machinations of the infantilised children as they jockey for advantage, trying to win the game of imaginary approval driving sibling rivalry.

In The Living Sea of Waking Dreams it is a matriarch rather than a patriarch slowly, messily and unevenly passing out of the world. Yet, while Logan Roy is a monster and Francie a saint, the effect in the adult children is exactly the same.

The brilliance of Flanagan’s story and the deep power of this novel is in our witnessing of the end of the world. The death of Francie opens up a black hole in the family drawing Anna, Terzo and Tommy into its implacable singularity.

At the same time as this family’s little world is collapsing, the world itself is in its own end times. Ash rains down from the sky and one ecological catastrophe after another interrupts Anna’s social media feed. This conjunction presents a new form of what is called the pathetic fallacy, in which we project the world of our inner emotions and moods onto the natural world.

A sullen sky, a bright morning, a funereal forest — some basic animism in us takes the world to be the sounding board of our affects. It is a symptom of the Anthropocene these affinities have become planetary.

Read more: How the term ‘Anthropocene’ jumped from geoscience to hashtags – before most of us knew what it meant

Is Flanagan’s novel an ecological novel? The luxury of choosing has now all but gone.

We no longer have to turn our minds to an ecology forcing itself into our lungs and washing up on our every shore. The novel has a dimension of allegory, but it is no longer clear which direction it is flowing.

The pathetic fallacy was thought to serve the psychic needs of people by offering them a consoling mirror in the natural world, but what if its true point was to turn our subjective misery into ethical environmental action?

Certainly, the moribund Francie seems an emblem of a dying maternal nature. The ever greater efforts her children expend on keeping her alive evoke the desperate rear-guard actions to prevent this or that catastrophe.

But the novel’s most persuasive ploy is not based on the redeployment of sympathy. At regular intervals, Anna realises she is missing a body part. It begins with a missing finger. Later her knee, then a breast, an eye. Others, too, start to lose body parts.

These “vanishings”, as they come to be known, are entirely painless and seem to go almost unnoticed. It is as if, we are told, they have simply been photoshopped away.

The uncanny part is not the loss of the limb, but the fact the phenomenon is going unremarked. This is what extinction feels like. Something is gone that was once there. We are briefly confused, but then we reassemble the picture and push on.