Fast Radio Bursts Across The Universe: What We Know So Far 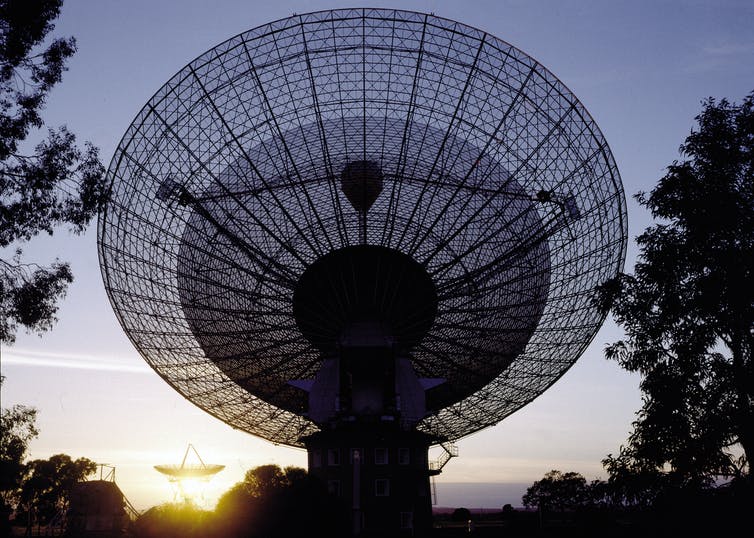 Fast radio bursts are one of the great mysteries of the universe. Since their discovery, we have learned a great deal about these intense millisecond-duration pulses.

But we still have much to learn, such as what causes them.

We know the intense bursts originate in galaxies billions of light years away. We have also used these bursts (called FRBs) to find missing matter that couldn’t be found otherwise.

With teams of astronomers around the world racing to understand their enigma, how did we get to where we are now?

The first FRB was discovered in 2007 by a team led by British-American astronomer Duncan Lorimer using Murriyang, the traditional Indigenous name for the iconic Parkes radio telescope (image, top).

The team found an incredibly bright pulse — so bright that many astronomers did not believe it to be real. But there was yet more intrigue.

Radio pulses provide a tremendous gift to astronomers. By measuring when a burst arrives at the telescope at different frequencies, astronomers can tell the total amount of gas that it passed through on its journey to Earth.

The Lorimer burst had travelled through far too much gas to have originated in our galaxy, the Milky Way. The team concluded it came from a galaxy billions of light years away.

To be visible from so far away, whatever produced it must have released an enormous amount of energy. In just a millisecond it released as much energy as our Sun would in 80 years.

Lorimer’s team could only guess which galaxy their FRB had come from. Murriyang can’t pinpoint FRB locations very accurately. It would take several years for another team to make the breakthrough.

To pinpoint a burst location, we need to detect an FRB with a radio interferometer — an array of antennas spread out over at least a few kilometres.

When signals from the telescopes are combined, they produce an image of an FRB with enough detail not only to see in which galaxy the burst originated, but in some cases to tell where within the galaxy it was produced.

The first FRB localised was from a source that emitted many bursts. The first burst was discovered in 2012 with the giant Arecibo telescope in Puerto Rico.

Subsequent bursts were detected by the Very Large Array, in New Mexico, and found to be coming from a tiny galaxy about 3 billion light years away.

In stark contrast to the previous galaxy, this galaxy was very ordinary. But our published discovery was this month awarded a prize by the American Association for the Advancement of Science.

A burst from close to home

On April 28, 2020, a flurry of X-rays suddenly bashed into the Swift telescope orbiting Earth.

The satellite telescope dutifully noted the rays had come from a very magnetic and erratic neutron star in our own Milky Way. This star has form: it goes into fits every few years.

Two telescopes, CHIME in Canada and the STARE2 array in the United States, detected a very bright radio burst within milliseconds of the X-rays and in the direction of that star. This demonstrated such neutron stars could be a source of the FRBs we see in galaxies far away.

The simultaneous release of X-rays and radio waves gave astrophysicists important clues to how nature can produce such bright bursts. But we still don’t know for certain if this is the cause of FRBs.

The CHIME telescope has collected by far the largest sample of bursts and is compiling a meticulous catalogue that should be available to other astronomers soon.

Read more: How we closed in on the location of a fast radio burst in a galaxy far, far away

A team at Caltech is building an array specifically dedicated to finding FRBs.

There’s plenty of action in Australia too. We are developing a new burst-detection supercomputer for ASKAP that will find FRBs at a faster rate and find more distant sources.

It will effectively turn ASKAP into a high-speed, high-definition video camera, and make a movie of the universe at 40 trillion pixels per second.

By finding more bursts, and more distant bursts, we will be able to better study and understand what causes these mysteriously intense bursts of energy. https://www.youtube.com/embed/0t0KoVhqz3Y?wmode=transparent&start=0 For the localisation of the first ‘one-off’ FRB, our team was awarded the 2020 Newcomb Cleveland Prize from the American Association for the Advancement of Science.