Australians Need To Decide If This Is The Kind Of Country We Want To Live In From Now On. The Best of 2021. 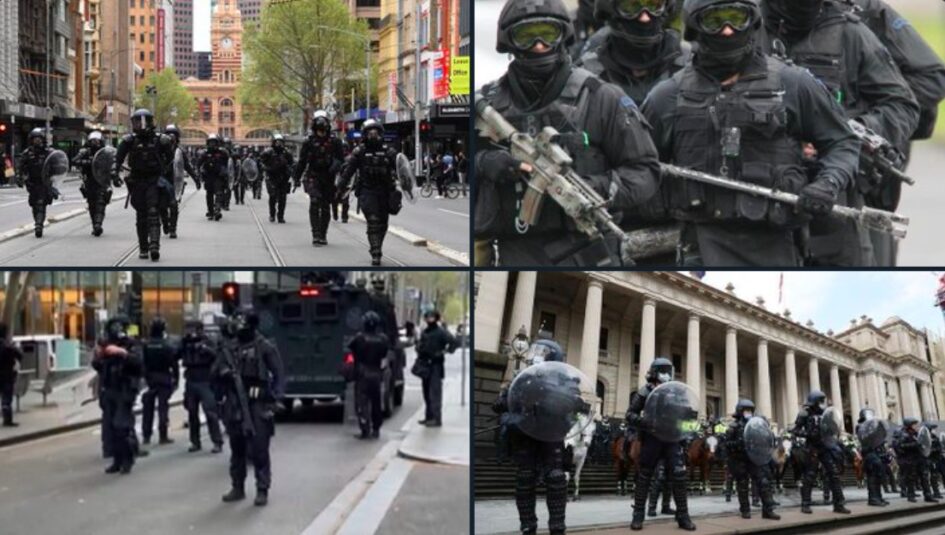 A lot has changed for Victorians since the lockdowns started. Our lifestyles. Our waist sizes. The kinds of things we see as normal.

And a lot has changed in Victoria itself since we’ve been in lockdown as well. For example, have you seen our police lately?

If memory serves, they used to look something like this:

But now we’re seeing police that look like this:

What type of Police is this?@Voice4Victoria

And they’re acting differently too. They’re firing on protesters with rubber bullets and other projectile weapons with alarming frequency in order to end demonstrations against government shutdowns, lockdowns and vaccine mandates, frequently for no other reason than because the demonstrators are disobeying them.

Raw footage of the final two minutes of the protest at the Shrine of Remembrance. 22.09.21

“But Caitlin!” you may object. “Those people they’re firing on are Bad People! They’re right-wingers and anti-vaxxers! And they’re protesting without permission!”

Okay, if you don’t want to oppose police brutality on principle without making it about the supposed ideological positions of its victims then that’s your right. But surely you don’t think the normalization of this kind of violence is something that’s only going to affect people you disagree with politically going forward, do you? Surely you’re not naive and narcissistic enough to believe the many dramatic deviations from normal policing protocol we’ve been experiencing during these protests will be rolled back when you personally no longer deem them necessary?

Because that would be a very silly thing to believe. The way police are dealing with protesters today is the way they’re going to deal with them from now on, unless we do something. And in order for that something to be done we’re going to first have to collectively ask ourselves, is this the kind of country we want to live in from now on?

Do we want to live in a country where protesters are fired upon by dangerous projectile weapons if the police decide it’s time for them to leave? Where protests are violently quashed if the government (the only so-called democracy in the world without any kind of statute or bill of rights, mind you) decides they don’t have permission to protest? Where armored stormtroopers patrol the streets? Where people are apprehended simply for filming police? Where police show up at your doorstep to interrogate you on whether you’re planning to attend any protests or know of anyone who is?

I understand that lockdowns and vaccine passports are still fairly popular ideas here, but at what point do we say no? At what point do we say enough is enough? If those policies have literal soldiers patrolling Australian streets and enforcing state borders, if they have sectors of the populace so upset that heavily armed riot police are exercising abuses that will certainly be used on racial and environmental justice demonstrators in the future the moment their demonstrations are deemed unauthorised, is it really worth holding that hard line? How much of our soul is Australia willing to trade in order to enforce strict Covid regulations?

How far is too far? Looking at the footage that’s been circulating these past few days, I would say that too far is in our rear view mirror right now. Time to hit reverse and start saying no.

A Sense of Place Magazine, auspol, Australia, Australian politics, Australians Need To Decide If This Is The Kind Of Country We Want To Live In From Now On, Caitlin Johnstone, lockdown protests, protests Australia