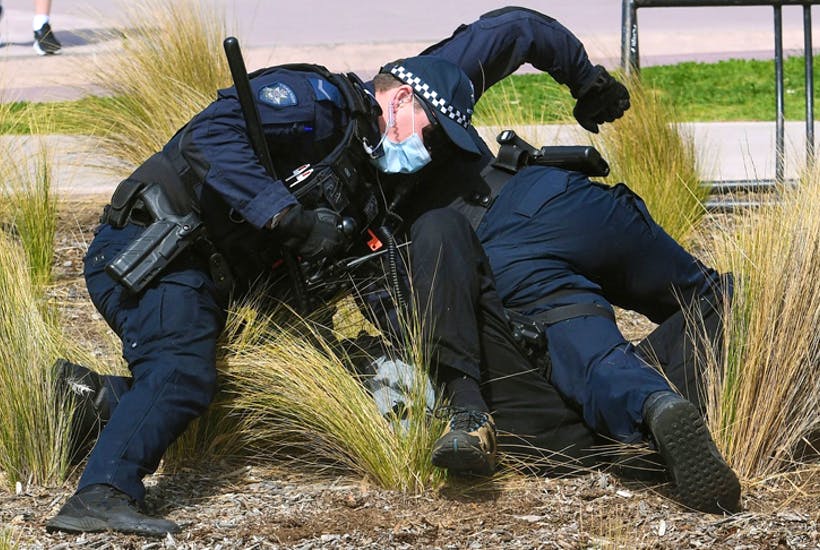 Amid the devolved state of Australian mainstream media, which has played a diabolical role in inducing a population wide anxiety psychosis during the Covid era, one publication has stood out from the rabble of self-serving government propagandists, and that has been Spectator Australia.

The Covid era has highlighted the squalid state of contemporary journalism, and the dismal repercussions the lack of a strong and healthy press has had on public debate and the nation’s welfare.

And oddly enough perhaps, for what has been seen by the chattering classes as little more than an arcane coterie for conservative pundits, Spectator Australia has filled the void of articulate dissenting voices.

Spectator Australia was established in 2008 as a separate edition to its British mother publication, which was founded in 1828. It has come into its own during this period; its out of step sidelong analysis and an assumption of a certain level of education in its audience is at last bearing fruit; in the midst of what can only be called a national derangement. A genteel counterpoint to the delusion and utterly irresponsible coverage of the mainstream media, which has held no divergent opinions from the government generated narrative of panic and fear, with Premiers and their unelected Chief Medical Officers front and centre of the debacle.

Journalism, not the unthinking blathering idiocy of TV’s breathless case reporting, but the thinking end of the spectrum, tends to lean left, and Australia’s left leaning independent media has largely ignored the biggest news story of the decade, the out of control thuggish conduct of state governments and their cohorts in the police, the nation’s frighteningly rapid plunge into totalitarianism.

‘Look what’s going on in Australia right now. After a year and a half they are still enforcing lockdowns by the military. That’s not a free country. It’s not a free country at all, in fact, I mean, I wonder why we would still have the same diplomatic relationships when they are doing that. Is Australia freer than China – communist China – right now? I don’t know, but the fact that that’s even a question tells you something has gone dramatically off the rails’.

Someone had to call it out.

As the Spectator editorial points out:

“Off the rails’ is putting it mildly. That was Florida’s Republican Governor Ron de Santis answering questions about last week’s protests and subsequent police crackdowns in Melbourne. For those who didn’t see the images on social media (the majority of the mainstream media avoided showing them), the approach by the Mussolini-style, black-clad Victorian Police forces included bludgeoning a man on the ground with a rifle butt, tackling numerous unsuspecting individuals onto concrete surfaces, shooting people with rubber pellets, throwing a 70-year-old woman to the ground and then spraying her in the face with capsicum spray and other such grotesque human rights abuses almost too numerous to mention.

“These images are now sweeping the globe and are fast becoming the new face of Australia.

“Already one Victorian police officer has been suspended but a full investigation is needed and criminal charges must be laid where police brutality has occurred. Shamefully, not a single political leader has so far addressed these potential crimes, preferring instead to demonise the protesters and hide behind the Orwellian shield of ‘public health’.”

Interestingly, as Spectator Australia have themselves been quick to point out, the new Premier of New South Wales, who has taken over the reigns of a state with most of its eight million citizens in lockdown, hales from the Spectator stable.

In their piece Crack Open the Dom, they point out: “It’s not often these days that somebody who is a conservative, a Christian and a contributor to this magazine ends up as one of the most powerful leaders in the country. So the news that Dominic Perrottet is now Premier of Australia’s premier state is to be warmly welcomed by all who value traditionalism, reason and freedom. Pop out the bubbly, and if it’s Dom Perignon, so much the better.”

The now Premier of NSW, Australia’s most populous state, wrote:

Already the NSW Premier is moving to open up his badly damaged state, with children now expected to return to school in a staggered opening beginning on the 18th.

And already the nation’s left leaning journalists, despite the 20 months of authoritarian derangement which has destroyed all Australia’s traditional liberties, are scolding the government and quoting their academics of choice that it may all be too early.

While the rest of the world looks on in disbelief.

The Spectator has repeatedly confronted the government propaganda machine, be it on lockdowns or mandatory vaccination.

They are the only mainstream publication to prominently point out that the average age of death from Covid in Australia is higher than the expected lifespan of an individual:

The average life expectancy in Australia is 82.8.

And the only mainstream mass circulation publication to repeatedly bring into question the morality behind mandatory vaccinations, now creating havoc across multiple industries as conscientious objectors leave their jobs rather than have “the jab”; including police, aged care workers, teachers and nurses.

“Mandating or coercing COVID vaccination is one of the most important civil liberties issues of my lifetime. It’s a fundamental breach of human rights allegedly guaranteed by a number of international conventions and Australian law, as well as our long tradition of liberal democracy.

“Nowhere is the legal  case against put more clearly than in a judgment of the Fair Work Commission published on Monday.  It says, in a dissenting judgment, that because the vaccines are part of a clinical trial, coercing someone to take them breaches The Nuremburg Code, the Universal Declaration of Human Rights, the Declaration of Helsinki, and the Siracusa Principles.”

While much of the rest of the nation’s media act like a mindless herd, the heavily perfumed television presenters fuelling hysteria with every breathless word, Spectator Australia now regularly calls out the insanity gripping the country.

As contributor Alexandra Marshall writes: “Something dangerous has happened to Australia.

“We have allowed the interests of ‘collective health’ to erase individual human rights.

“It has become acceptable to imprison, hurt, fine, intimidate, arrest, segregate, discriminate, oppress, and financially ruin individuals – so long as it is done in the interest of public health.

“While the personal ethics of our politicians should have prevented a situation like this from arising, Australia has learned that there isn’t a scrap of morality within Parliament, the courts, or the legions of human rights lawyers.

But it has been the recruitment of the esteemed Professor Ramesh Thakur of the Australian National University, now Australia’s foremost commentator on public policy during the Covid era, which has taken the Spectator’s coverage to a new level.

In a standout from the moral panic which characterises mainstream coverage Thakur wrote: “Our so-called leaders are so blinded with the lockdown cult that they would stubbornly refuse to see reality even if it hit them hard on their faces and knocked them out.

“Nature expects adults to protect the young. Covid mania has turned nature upside down. This is depraved and a sign that society has lost its moral moorings. So don’t come a-waltzing morality on me.”

Once an outlier in Australia’s commentariat as a lockdown sceptic despite his formidable intellectual clout, Thakur has been totally vindicated:

“We know the virus doesn’t keep climbing and growing exponentially. That hasn’t happened anywhere in the world. Sooner or later, the curve will bend and head down. The strategy seems to be to wait for that peak, claim proof of success for restrictions and begin lifting them. Otherwise the doubling down on lockdowns despite daily evidence of how completely ineffectual they are makes no sense whatsoever.

“Even more depressingly, most journalists and people seem to accept that transparent but flawed logic and credit their government with successful Covid management, despite clear evidence both locally and globally that policy interventions enforce coercive control on human behaviour without materially altering virus behaviour.”

There is hope, even in the darkest times, and let’s just hope, in terms of Australian history, that the old phrase “it is darkest before the dawn” is true of a nation which has lost its way.

Thakur’s contributions to Spectator Australia now amount to a significant body of work at a critical time in the country’s evolution. Here is a sampling: