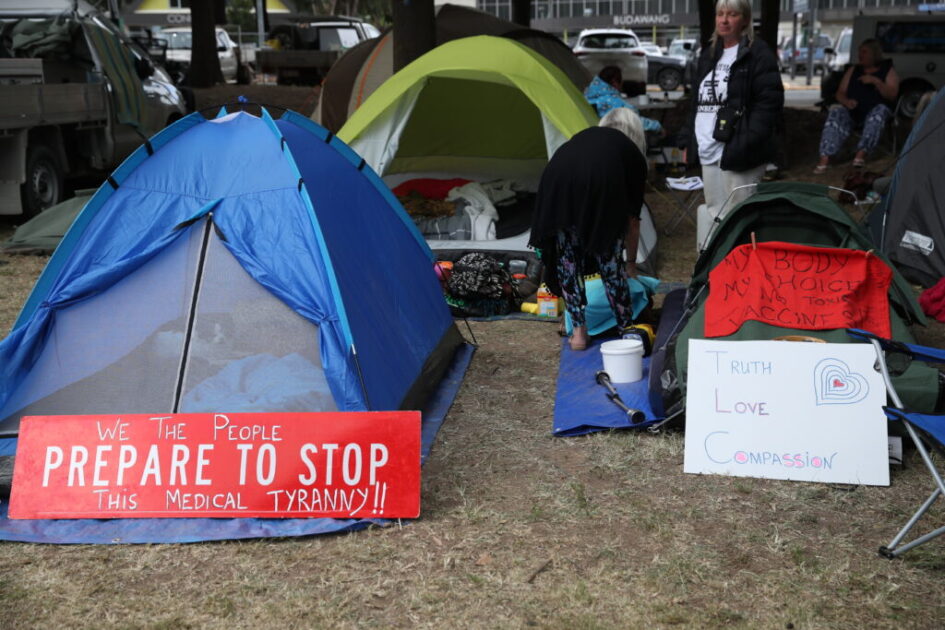 Twenty four hours after a jubilant atmosphere gripped Canberra, with a massive protest involving crowds estimated between 500,000 and a million in one of the largest protest gatherings in Australian history, a deep anxiety has afflicted the camps of protestors.

Tensions have been rising throughout the day; with many protestors either leaving after the rally, while others, lured out of Camp Freedom at the Epic Showgrounds on the outskirts of Canberra to a rural property 40 kilometres outside, now have nowhere to go after police blocked entrance to the alternate camping site.

Orders were broadcast by police ringing the site that protestors must leave the campsite by midnight or face arrest for trespassing.

The atmosphere is intensely chaotic; with many protestors having no idea where they can go or what to do. There are reports that hundreds of groups are now camping along the sides of Canberra roads.

There are an estimated 20,000 protestors still left on the grounds, which were filled to capacity on Saturday with campers establishing a sprawling tent city around the showgrounds.

The atmosphere has been electric, a kind of Woodstock without the drugs or the mud, with a high degree of cooperation and good will between a very diverse assembly, from the elderly and the suburban through to wild and the free.

Many expressed almost identical sentiments: “I was compelled to be here. I was drawn here. I just knew I had to be here. God was in my head and told me to come here.”

Significant numbers of the people we have interviewed during this chaotic and glorious period of Australian history say they have nothing to go home for, they have lost their jobs and their homes and been made to feel like aliens in their own country. They want to stay in Camp Freedom, where they have found a new family and a new home.

The putative leaders of the movement and organisers of the Canberra Convoy appear to have largely disappeared off the site. While there was a remarkable atmosphere of collaboration and good will between campers, there were deep divisions between sections of the movement on clear display; both personality clashes and political differences. The division ran along the lines of those who wished to work within the system to reform the policies they dislike, such as lockdowns and vaccine mandates, and those who wish to dissolve parliament altogether and establish an new kind of polity.

“Oh My God, this is a War,” exclaimed one protestor amid the increasingly confused circumstance.

At an incendiary meeting of confused campers near Gate Seven of the showgrounds various speakers put their points of view.

Faced with imminent arrest, many were disappointed at the departed leadership.

Another speaker said: “People, do not be scared. I was there at the last eviction. Get your popcorn ready.”

One speaker, wearing a t-shirt blazoned with the words I Do Not Comply, said: “If we walk away we might as well not have come here in the first place. The demons have done their work and 75% have left. But we are staying.”

Another agitated camper declared: “They are all a fraud. The people are the authority.”

Yet another declared: “The sheep have left, we are the fighters. We are going to win.”

Another passionate speaker declared: “I was a builder earning $4000 a week. I lost my job to come down here. I have five kids. I am staying until this is done.”

There are signs littering the increasingly sad and fraught site, along with messages blazoned on cars and t-shirts.

On signage: “Protect The Children.” “Leave My Kids Alone.”

On t-shirts: “Unvaxxed Untested Unafraid.” “Let No Man Deceive You.”