By Professor Augusto Zimmerman. Augusto Zimmerman has been one of the few Australian academics to speak out boldly about the dysfunction in the nation’s family law and child support systems. He does so from a position of strength, being a… END_OF_DOCUMENT_TOKEN_TO_BE_REPLACED

The Fracturing of Australian Democracy: Death of the Non-Custodial Parents Party

By John Flanagan In terms of human suffering, the Australian public has already paid dearly for the failure to reform outdated, badly administered and inappropriate institutions dealing with family breakdown — and for the failure of governments to take seriously the voices… END_OF_DOCUMENT_TOKEN_TO_BE_REPLACED

The Birth of Dads On The Air: Interview with co-founder John Stapleton

When Dads On The Air, now the world’s longest running fathers’ show, began in 2000 we had no idea we were part of a worldwide trend protesting the treatment of fathers in separated families. We were a small group of… END_OF_DOCUMENT_TOKEN_TO_BE_REPLACED 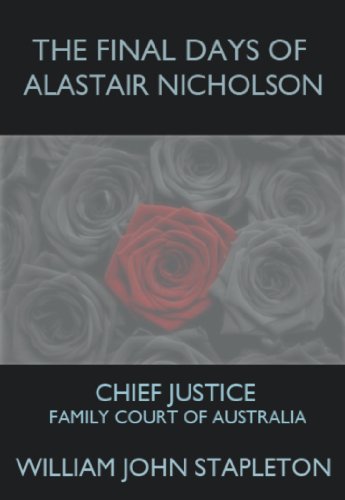 Alastair Bothwick Nicholson, Chief Justice of the Family Court Australia from 1988 until 2004, is the dominant figure in the history of family law in Australia.

While the Family Court is deliberately kept out of the arena of contemporary public debate, it was not always so.

The Final Days of Alastair Nicholson: Chief Justice Family Court of Australia covers a period of intense media coverage and fervent hope that the troubled jurisdiction would be reformed.

Those dreams were dashed, with the then Prime Minister John Howard ignoring public support for shared parenting and a shift away from the traditional sole custody model.

The marginalisation and demonisation of fathers stood oddly with the country’s egalitarian traditions.