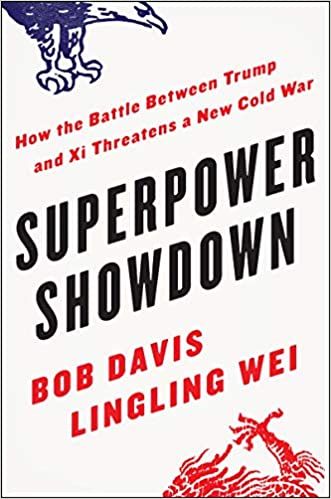 The US/China relationship — arguably the most important in the world — is on a downward spiral.  The authors of Superpower Showdown describe it as a “romance gone bad.”

We often read reviews claiming that a new book is very “timely.”  We cannot say that about Superpower Showdown: How the Battle between Trump and Xi Threatens a New Cold War.  So much has happened, and not for the better, in the few months since authors Bob Davis and Lingling Wei, two Wall Street Journal reporters, put their draft to bed.

For example, there are the tit-for-tat accusations about COVID-19.  Then there is Beijing’s national security law imposed on Hong Kong.  Just recently, the US closed China’s consulate in Houston, Texas, after which China closed the US consulate in Chengdu.  US Secretary of State Mike Pompeo reprimanded allies for failing to prevent the prospect of “a Chinese century.”  And Lingling Wei, who now has US citizenship, was one of a group of American journalists who were expelled from China in March this year.

Ironically, while trade was Donald Trump’s main bugbear with China, it is now virtually the only topic on which the two superpowers communicate, according to Davis and Wei.  And Superpower Showdown offers a superb first draft of the history of the trade war between the US and China, as well as fascinating insights into the troubled relationship between the two.

A major early development in the China/US trade relationship was when Premier Zhu Rongji negotiated China’s membership of the World Trade Organization.  US business leaders pushed for China’s membership, which was supported by US President Bill Clinton, who believed that China’s economic opening would also lead to political opening.  The US would continue misreading China’s rise for almost three decades, write the authors.

Another milestone was the (made in America) global financial crisis of 2007-2010.  The Chinese government interpreted this crisis as evidence of the superiority of its economic model based on state control.  China won appreciation as it came to the rescue of the global economy with its massive stimulus package.  China grew in confidence and would henceforth be resistant to American pressure to open its markets, according to Davis and Wei.

When Xi Jinping assumed the leadership of China in 2012, he promoted his “China Dream” of national rejuvenation.  Xi believes China has arrived and is on par with the US.  He also believes that previous leaders like Premier Zhu Rongji were too deferential to the US.  According to the authors, Xi is the most assertive, forceful, and ideologically driven leader in recent Chinese history.

Indeed, Davis and Wei argue that, “At the heart of the US-China trade war is the fear that China will eclipse the US technologically on its way to economic and military superiority.”  In other words, this Cold War is different as it is about global economic and technological supremacy, more than military domination.

The first year of the Trump presidency, 2017, was a honeymoon of sorts with China, as they exchanged state visits, and Trump sought China’s help vis-a-vis North Korea.  Then Trump launched his trade war against China.  But this was erratic, according to Davis and Wei.  Different US officials — Commerce Secretary Wilbur Ross, Treasury Secretary Steven Mnuchin, and Trade Representative Robert Lighthizer — were lead negotiators at different times, and each had different priorities.  Trump was most concerned about the US trade deficit with China.  Lighthizer focussed on intellectual property issues and enforcement, while Mnuchin wanted more opening of the financial services market.  The authors describe the chaos of the team as “blue-collar Trump” and “Wall Street-Trump.”

By April 2019, it appeared, to the Americans at least, that the two sides were on the verge of a trade agreement.  But the Chinese leadership ultimately judged the draft agreement to be too one-sided and unbalanced, and wanted to push back and renegotiate.  The Americans interpreted this as bad faith by the Chinese, and so these trade talks collapsed.  Beijing had not appreciated the hardening in America’s attitude to China.  In short, both sides misread each other, Davis and Wei argue .

After cooling off, the Americans settled for a “phase one” agreement in February this year.  This involved unrealistic commitments by China for increases in imports of US goods, and some limited movement on intellectual property and financial market opening.

While Trump is proud that he could get a deal with China, he may have done better had he not thrown in the towel in 2019, the authors argue.  Indeed, for all his bluster, very little has been achieved by his trade war, and nothing may ever be resolved in this clash between state and market capitalism.

China may also be happy that it has avoided serious reforms.  But it also lost as Trump hiked tariffs and imposed sanctions on Huawei after April 2019.  Moreover, the loss of trust between the two sides left China in a worse position for managing COVID-19.

Ironically, the reforms that the US is pushing would be good for the Chinese economy in the long run.  China desperately needs reforms, as productivity growth has been sagging for some years, population aging is now biting, and it has accumulated an enormous debt.  But under Xi Jinping, there is little willingness to lift state controls over the economy.

The authors describe the phase one deal as a mere truce in the trade war,  and they are convinced that there is no chance of a phase two deal until after the US presidential election, and perhaps never at all.  China does not want a phase two deal because that would involve core interests of the Communist Party, namely reform of state-owned enterprise, subsidies, intellectual property policy, and rigorous enforcement of reform.

Superpower Showdown provides an excellent blow-by-blow chronicle of the China/US trade war.  But after reading the more than 400 pages of text, I was hungering for more analysis of the issues and speculation of what the future might hold, especially in light of the upcoming US elections.

Interestingly, Bob Davis was asked in a recent webinar how the China/US trade tensions could be resolved, drawing lessons from the earlier Japan/US case.  He responded that the Japan problem went away after its economy tanked in the 1990s and it didn’t seem as important anymore.  He continued that while no one wants it, it’s also possible that the Chinese economy could tank for a decade or more, in light of its debt and other structural problems, and the trade confrontation would fade, even though China would remain a military power.

This is a review of Bob Davis & Lingling Wei, Superpower Showdown: How the Battle Between Trump and Xi Threatens a New Cold War (HarperCollins, 2020) ISBN 9780062953056.  This book is available for purchase from the Wilson Center.

John West is adjunct professor at Tokyo’s Sophia University and executive director of the Asian Century Institute. His recent book “Asian Century … on a Knife-Edge” was reviewed in Australian Outlook.

This article was originally published by the Australian Institute of International Affairs and is republished here under a Creative Commons Licence..

“This is essential reading for anyone concerned about America’s economic future.” (Publishers Weekly (starred review))

“‘We hope this book provides the material to understand what happened and why,’ the authors conclude. Mission accomplished.” (Kirkus Reviews)

“A must-read for anyone interested in what happened between China and the United States, likely the world’s most important economic relationship.” (Forbes)

“If you’ve ever wished you were a fly on the wall as top leaders in the U.S. and China were considering how to parry their counterparts’ most recent moves, here’s your big chance.

“This is essential reading for anyone concerned about America’s economic future.” (Publishers Weekly (starred review))

“‘We hope this book provides the material to understand what happened and why,’ the authors conclude. Mission accomplished.” (Kirkus Reviews)

“A must-read for anyone interested in what happened between China and the United States, likely the world’s most important economic relationship.” (Forbes)

“If you’ve ever wished you were a fly on the wall as top leaders in the U.S. and China were considering how to parry their counterparts’ most recent moves, here’s your big chance. The book starts out with an incredible reveal, at least for those of us who have watched China for years .” (Axios)