Protests Have Been Criminalised in Victoria under COVID. What is Incitement? 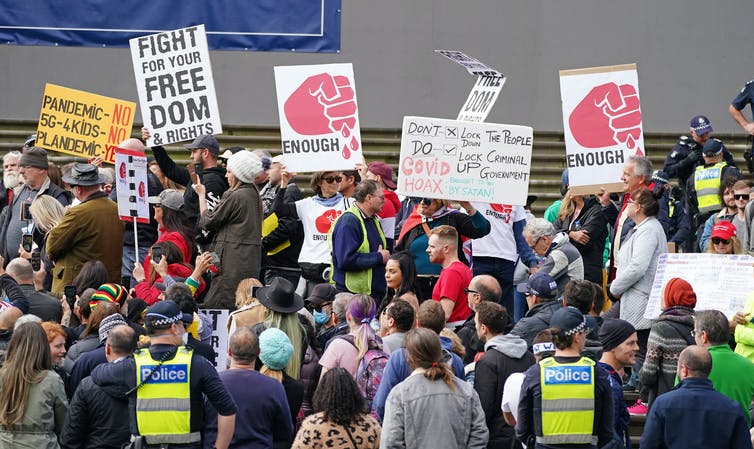 The Victorian government is taking a hard line against protests as it tries to get COVID-19 under control. As Premier Daniel Andrews said on Thursday,

it’s not the time to protest […] regardless of what you’re protesting about.

In this climate, several people have recently been charged with incitement in relation to “anti-lockdown” protests in the state.

So, what is incitement? And what makes it so complicated during a pandemic?

The offence of “incitement” criminalises behaviour that encourages others to commit a crime before the crime takes place.

Interestingly, the incitement need not be acted on for an offence to be committed. So it is enough, in the context of say, murder, that the “inciter” encourages another person to commit murder, even if that crime does not actually take place.

Read more: Can the government, or my employer, force me to get a COVID-19 vaccine under the law?

Using the Victorian Crimes Act as an example, prosecutors must establish, beyond a reasonable doubt, that

The meaning of “incitement” in legislation is very broad. For instance, the Victorian Crimes Act defines “incite” as to command, request, propose, advise, encourage or authorise.

What has been happening in Victoria?

This week, Victoria Police reported one man had been charged with incitement, following an alleged anti-lockdown gathering in Melbourne last weekend.

Additionally, and more controversially, a number of people have been arrested for incitement in relation to planned protests.

In a high-profile example, a pregnant woman was arrested in relation to a social media post, which allegedly encouraged people to attend a protest in Ballarat this weekend.

Three men have also been charged with incitement over allegedly coordinating a “Freedom Day” protest in Melbourne on Saturday.

These charges were also made in a different context back in April. Then, protesters staged a car convoy in Melbourne to highlight the plight of refugees. The organiser of the protest was arrested in his home under the charge of incitement, and again, before the protest had begun.

What is significant about these charges?

The application of incitement to protest is controversial for two main reasons.

Firstly, incitement is normally linked to the commission of a serious crime, such as murder or assault. The act of protest is not, of itself, a crime.

Read more: Is protesting during the pandemic an ‘essential’ right that should be protected?

This can lead to much more serious punishment – such as imprisonment and, importantly, the recording of a criminal conviction. This may have serious consequences for a person’s employment, if they have a criminal record.

The complexity of COVID

Because of the very serious nature of the charge of incitement, it has very rarely been used in relation to protest. This is because normally, protesting is not of itself a criminal offence.

In ordinary circumstances, protesting would only be considered a crime if protesters damage property, commit trespass or pose a threat to public order.

For example, climate change activists in Queensland were recently charged with a number of offences, including using a dangerous attachment device to interfere with transport infrastructure and trespassing on a railway (their convictions were thrown out on Wednesday).

Using incitement to protest under COVID is particularly complex, because the use of such a criminal charge for a breach of a public health restriction is unclear. The complication is that under a state of emergency, various “normal” activities, such as organising public gatherings and assembling in public places, are subject to a penalty.

Read more: Explainer: why is the Victorian government extending the state of emergency, and is it justified?

The application of incitement to protest during COVID is also messy as there is a significant lack of clarity about what some terms mean in Victoria’s stay at home directions. For instance, can protest be seen as an “essential” activity for the purpose of the directions? I have argued elsewhere that is should.

The use of incitement for protest under COVID poses new and complex legal questions.

These may well be tested in courts in time to come. Until then, Victorians under COVID need to look at incitement in a very different manner than before.