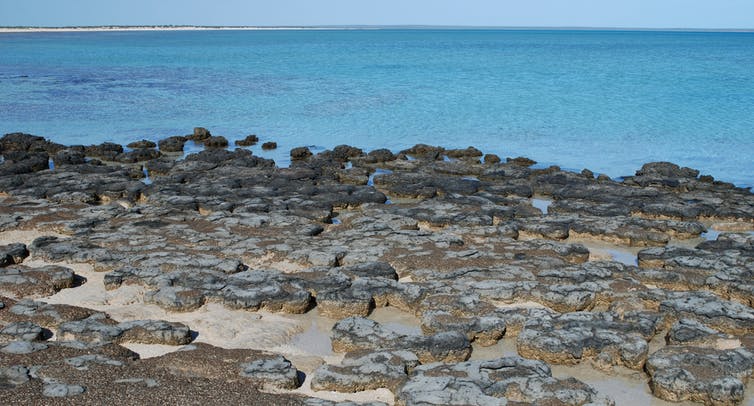 Chemical clues left behind by humble microbes have rewritten the timeline of one of the biggest mass extinction events in Earth’s history.

The so-called “end-Triassic mass extinction”, thought to have occurred just over 200 million years ago, wiped out swathes of prehistoric creatures both on land and in the oceans. It was prompted by the breakup of the supercontinent Pangea, which triggered massive volcanic activity that flooded the atmosphere with carbon dioxide and acidified the oceans.

But our new research, published in Proceedings of the National Academy of Sciences, suggests these cataclysmic events actually happened later than previously thought.

We made this discovery by examining molecular fossils — trace chemicals derived from microbial “mats” that bathed in prehistoric waters.

Traditionally, scientists have placed the mass extinction event, and the volcanic upheaval that presaged it, at about 201 million years ago.

They came to this conclusion after studying rocks of that age from the Bristol Channel, UK, which show a distinctive chemical signature. The ratios of different isotopes of carbon within these rocks suggest this was the moment when the global atmosphere changed, as huge amounts of methane were pumped into the skies due to massive volcanic activity covering the central Atlantic, in turn altering the chemical composition of rocks that formed during this time.

But we made a discovery that challenged this assumption. We found evidence of ancient microbial mats in the same region, at the same time. It was these flourishing communities of microbes that actually created the change in the chemical signature of the rocks, rather than a global volcanic event.

These microbial mats formed as the region’s waters changed from salty seawater to brackish or fresh water, and water levels dropped to puddle-like centimetre depths. This is another reason why scientists mistook this event for a mass extinction — marine creatures disappeared from the local fossil record at this time not because they had all died out, but because it was no longer marine.

Of course, the world’s marine creatures had only earned a relatively brief reprieve. We know the volcanic cataclysm did occur, but just not as long ago as previously assumed.

It’s amazing to think similar microbial communities are still living on Australia’s shorelines to this day.

For example, pigments and lipid remains from microbial mats found in the Chicxulub crater in the Gulf of Mexico — formed by the asteroid that wiped out the dinosaurs — show that photosynthetic processes had bounced back within 200,000 years of the impact.

A warning from prehistory

While we don’t know exactly how much later the global end-Triassic mass extinction event actually occurred, what we can say is that our research sounds a stark warning for potential future mass extinctions on Earth.

Knowing more about these changes will provide crucial information that could help understanding the threats our own ecosystems face today, and potentially help safeguard them for the future.

Read more: Triassic mass extinction may give clues on how oceans will be affected by climate change