Only The Lonely: An Endangered Bird Is Forgetting Its Song As The Species Dies Out 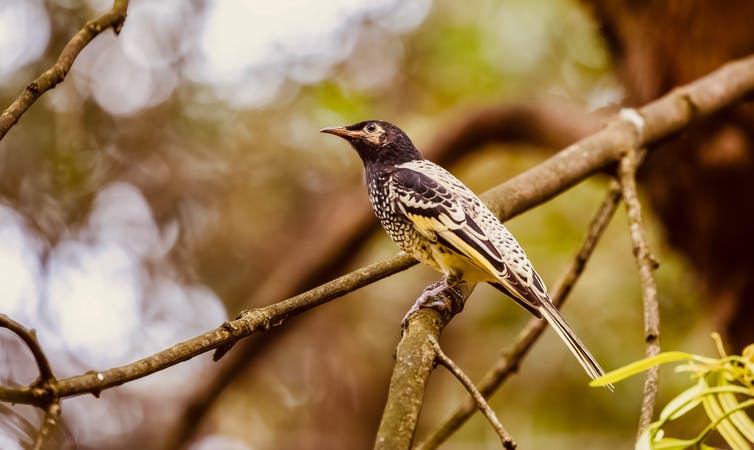 Just as humans learn languages, animals learn behaviours crucial for survival and reproduction from older, experienced individuals of the same species. In this way, important “cultures” such as bird songs are passed from one generation to the next.

But global biodiversity loss means many animal populations are becoming small and sparsely distributed. This jeopardises the ability of young animals to learn important behaviours.

Nowhere is this more true than in the case of regent honeyeaters. In a paper published today, we describe how a population crash to fewer than 300 has caused the species’ song culture to break down.

In healthy populations, the song of adult male honeyeaters is complex and long. But where the population is very small, the song is diminished and, in many cases, the birds have adopted the song of other species. Sadly, this makes the males less attractive to females, which may increase the chance the regent honeyeater will become extinct.

Since 2015, we have monitored the regent honeyeater – a critically endangered, nectar-feeding songbird. The birds once roamed in huge flocks between Adelaide and Queensland’s central coast, tracking eucalyptus blossom.

As recently as the 1950s, regent honeyeaters were a common sight in suburban Melbourne and Sydney but are now extremely rare in both cities.

Extensive postwar land clearing has destroyed regent honeyeater habitat and caused the population to plummet. Most breeding activity is now restricted to the Blue Mountains and Northern Tablelands in New South Wales.

Regent honeyeaters are most vocal during the early stages of their breeding season. Before the population decline, the birds were known for their soft, warbling song produced with characteristic head-bobbing. But with few birds left in the wild, their song is changing – with potentially tragic consequences.

Birdsong is one of the most well-studied examples of animal culture. Young songbirds learn to sing by listening to, repeating and refining the songs of older flockmates.

Song-learning is often completed in first year of life, after which a birds’ song is “fixed”.

Despite the increasing number of endangered bird species, there is surprisingly little research into how declines in population size and density might damage song culture in wild birds. We sought to explore whether this link existed in regent honeyeater populations.

Male regent honeyeaters sing to secure breeding territories and attract mates. We classified the songs of 146 male regent honeyeaters between 2015 and 2019. We made or obtained high-quality recordings of 47 of these in the wild, and more in captivity. This included wild birds found by the general public and reported to BirdLife Australia. We quickly chased up these public sightings to record the birds’ songs before they moved on.

We noted the location of each male and tracked its breeding success. We also recorded the songs of captive-bred regent honeyeaters that were part of a reintroduction program.

Our research showed the songs of remaining wild males vary remarkably across regions. For example, listen to the “proper” song of regent honeyeaters occurring in the Blue Mountains west of Sydney, where most of the remaining population occur:

You’ll notice they sound noticeably different to the small number of males hanging on 400km to the north, near Glen Innes. Although these males still sound like a regent honeyeater, their songs are slower and have a different melody:

Across the species’ entire range, we found 18 males whose songs sounded nothing like a regent honeyeater. Instead, they closely resembled those of other bird species. Five male regent honeyeaters had learned the song of the little wattlebird:

Four males had learned songs of the noisy friarbird. Others sounded like pied currawongs, eastern rosellas or little friarbirds:

There are isolated cases of individual songbirds mistakenly learning the song of a different species. But to find 12% of males singing only other species’ songs is unprecedented in wild animal populations.

We believe regent honeyeaters are now so rare in the landscape, some young males are unable to locate adult males from which to learn their song. Instead, the young males mistakenly learn the songs of different bird species they’ve associated with when developing their repertoires.

Evidence suggests this song behaviour is distinct from the mimicry common in some Australian birds. Mimicry involves a bird adding the songs of other birds to its own repertoire – and so, not losing its original song. But the regent honeyeaters we recorded never sang songs that resembled that of their species.

Read more: Look up! A powerful owl could be sleeping in your backyard after a night surveying kilometres of territory

Also, mimicry in other species has typically evolved because it increases breeding success. However in regent honeyeaters, we found the opposite. Even among males that sounded like a regent honeyeater, those whose songs were unusual for the local area were less likely to impress, and be paired with, a female. Females that did couple up to males with unusual songs were less likely to lay eggs.

These data suggest the loss of song culture is associated with lower breeding success, which could be exacerbating regent honeyeater population decline.

The song of a captive-bred regent honeyeater.

This may affect the breeding success of captive-bred males once they’re released to the wild. Consequently, we’re teaching captive juveniles to sing correctly by playing them our recordings of “proper” songs from wild birds in the Blue Mountains.

Maintaining animal cultures in both wild and captive populations is increasingly recognised as crucial to preventing extinctions. These cultures include not just song, but also other important behaviours such as migration routes and feeding strategies.

The loss of the regent honeyeater song culture may be a final warning the species is headed for extinction. This is an aspect of species conservation we can’t ignore.

We must urgently restore and protect breeding habitats, protect nests from predators and teach captive-bred birds to sing. We must also address climate change, which threatens the species’ habitat. Otherwise, future generations may never hear the regent honeyeater’s dulcet tones in the wild.

Read more: Birds that play with others have the biggest brains – and the same may go for humans