Concerns Over Surveillance Units in Melbourne 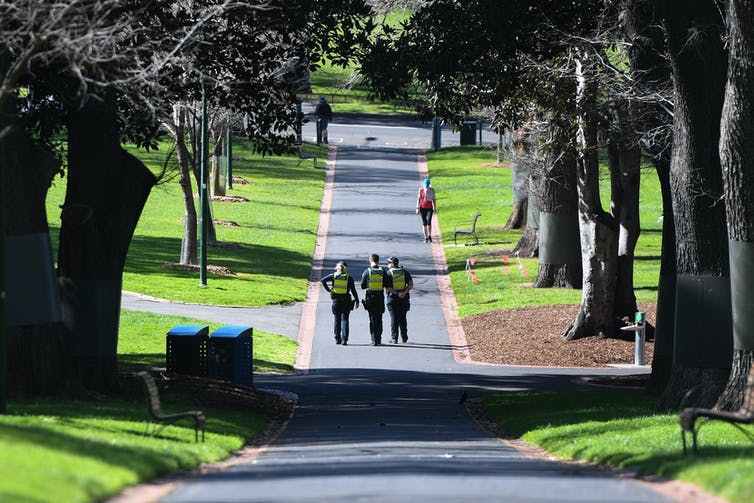 The technology is the latest step in Melbourne’s ongoing shift towards a techno-fascist state, which has seen the introduction of facial recognition cameras and other ‘smart city’ initiatives.

The revelations come as the Victorian Premier Daniel Andrews announces increased roadblocks around urban Melbourne to stop and fine anyone attempting to leave for regional Victoria, where draconian lockdowns are being moderately eased.

The Guardian newspaper reports that there are now seven permanent checkpoints across Melbourne’s main arterials.

“Melbourne’s “ring of steel” is tightening, with city residents now facing fines of nearly $5,000 for attempting to escape to regional Victoria.

“As a result, Victorian authorities have introduced a new offence – in line with its fines-enforced lockdown – prohibiting people from “leaving a restricted area”, as stipulated in the declared state of disaster.

“Concerns with police behaviour in enforcing the lockdown have also brought the measures into question, with recent allegations of heavy-handed tactics being used, including an alleged “violent assault” of an indigenous man left with a broken arm after police spear-tackled him off his bike as he rode to work.”

With all pretense at democracy having been abandoned and epidemiologists around the world warning that the Covid scare has been totally exaggerated Victoria and thereby Australia has become a laughing stock around the world.

Deputy Police Commissioner Rick Nugent told reporters: “We will be checking every vehicle that is towing a caravan, a camper trailer or other trailer, towing a boat or a jet ski, or has a surfboard, a fishing rod or swags. They will all be checked.”

Authorities in Melbourne are using new ‘pop-up surveillance stations’ across the region, including public spaces, to ensure harsh COVID-19 restrictions are being met at all times.

Part of a joint initiative between several Melbourne councils, Victoria Police and the Commonwealth government, the units are mounted with closed circuit cameras.

One of the units has been based at Victoria Gardens in Prahran for the past few days, but has also been seen at other locations around the municipality of Stonnington in Melbourne’s inner-south.

Many people are already claiming the Victorian government has once again overstepped the mark in its aggressive approach to suppressing COVID-19.

Prahran resident Denzil Griffiths says he is disgusted that visitors to the park on High Street were being remotely monitored, which he said was “reminiscent of what’s going on in Hong Kong”.

“This is just the latest intrusion in our lives and there’s absolutely no justification for this type of surveillance. This is a public park, where parents go with there kids, people walk dogs and old people go for exercise as they’re all entitled to do”, Mr Griffiths said.

David Grayson from St Kilda East visited Victoria Gardens on Sunday morning and accused police of abusing new powers conferred on the force by the Chief Health Officer and the government.

“If you have a look around, everyone is doing the right thing and there’s absolutely no need for us to be spied on. They have no regard for our civil liberties,” Mr Grayson said.

“Are you telling me that someone is watching a screen somewhere and then sends the cops over when they see someone having a picnic or holding hands?”

I agree with these sentiments, David. What a creepy dystopian nightmare.

A Victoria Police spokesman has confirmed the mobile surveillance units have been deployed in other municipalities across Melbourne.

“The cameras can help to capture and deter breaches of Chief Health Officer directions as well as other crimes and community safety issues.”

“For operational reasons we will not be providing commentary on how many of these units are being used or where and when they are positioned,” the police spokesman said.

This is the same bloke that has accepted the constitutional law challenge in South Australia against the ‘No Jab, No Play’ rules. Honk, honk! More on the ‘truth movement’ being duped by lawyers later.

A spokesman for Stonnington Council also confirmed the use of CCTV mobile units, which were regularly moved between sites:

“The City of Stonnington and Victoria Police are working in partnership on a number of initiatives to monitor compliance with COVID-19 restrictions as we enter the warmer months, in particular monitoring key public areas where gatherings and social distancing may be an ongoing issue,” the spokesman said.

We recently published about how artificial intelligence and facial recognition technology will soon be used to monitor social distancing, and these statements above all but confirm these suspicions.

Let’s not forget what all these cameras are equipped with.

Melbourne is quickly descending into a fascist police state, underpinned by emerging technological capabilities that serve to enhance their operations, particularly in recent months.

The eyes of authorities are watching and it’s not just via these pop-up stations.

It is important to note that last year it was revealed Melbourne authorities are using CCTV cameras with facial recognition capabilities across the CBD:

Authorities switched on this biometric capability without formally notifying the public of proposals.

Indeed, Victoria is a key part of Australia’s launching of a social credit system on our own shores, with the ‘Melbourne as a smart city’ project already well underway.

This project has seen the establishment of open data platforms that have almost 100 unique data sets that are available for anyone to access and use.

Through an open data platform, you can view real time city data at any time.

One of the most striking elements of Melbourne’s new smart city features is what they describe as a ‘pedestrian counting system’ to track ‘anonymous’ numbers of individual movements.

This mysterious feature makes so much more sense now we are living through the clown show.

Furthermore, the City of Melbourne has played an important role in collaborating with government agencies, telecommunications providers, local businesses, startups, researchers and industry partners, to ensure the rollout of 5G and IoT to the community in 2020.

Now that Melbourne is undoubtedly a testing ground for a new age fascist police state, driven by the United Nations, the pieces of the biometric puzzle all fit together perfectly.

This was a long time coming and all the tools are in place. Not to mention, the new tools that have also emerged under the guide of ‘safety’ and ‘security’.

Since the beginning of the COVID-19 saga, governments across the country have implemented a range of digital tracking, physical surveillance and censorship measures in a bid to ‘slow the spread’.

If you don’t feel comfortable with mobile surveillance units, then you probably won’t be happy to hear about pandemic drones, COVIDSafe social credit pushes or other initiatives being rolled out.

We have seen the use of ‘pandemic drones’, fever scanning, CCTV cameras supporting facial recognition, social control by law enforcement agencies and much more.

Software is being developed that could see drones continued to be used to monitor the health of people moving forward — including spotting sneezes and tracking individual fevers.

“I think those are extraordinary measures that I suspect most people in Australia would find too much down the road to taking us to what George Orwell, Huxley and other people have warned us about the surveillance state that we could be in.”

iOmniscient has also developed an automated fever scanning system which can operate through CCTV cameras to check the temperatures of people in crowds. This is set to expand to shopping centers and public spaces across Australia.

These are just a few examples of the new methods that are merging with existing systems of the establishment. Systems that have been debated over privacy concerns for decades now.

The digital enhancements we have seen throughout this pandemic operation only strengthen an already tyrannical police force, which uses these means as both a sheet of armour and a boost.

Melbourne is not alone, with much of the country involved in smart city initiatives. However, it is imperative free thinkers in Victoria are reminded of this arsenal given the current circumstances.

George Orwell’s vision is becoming increasingly relevant as Australia continues throughout 2020. Like Winston, Victorians are forced to creep outside of the scope of Big Brother to enjoy freedoms.

This force is much more prevalent. Stay vigilant.