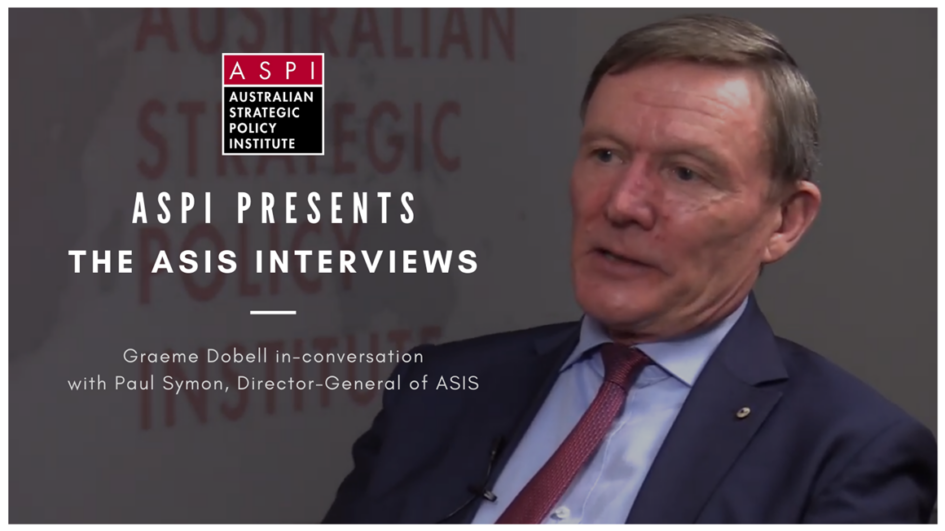 For the first time in the 68 year history of Australia’s overseas spy service, the top spy Paul Symon has gone before the camera for a four-part series of video interviews, conducted by distinguished journalist Graeme Dobell on behalf of The Australian Strategic Policy Institute.

Below are extracts from the first two interviews, the last just becomng available this week.

The full transcripts and interviews can be found here.

GD: Paul, why was the Australian Secret Intelligence Service (ASIS) created?
PS: Well, we need to turn our minds back to the early fifties. The Service was created in\ May 1952. In the early fifties we had a generation of political leaders, government bureaucrats, officials who had served in the Second World War; they had in many cases been part of the intelligence community when Australia was at war and defending itself.

And I think that, by 1952, we’ve got the Korean War underway, we’ve got the Cold War underway – we’ve got concern that the cold war would become a hot war. I think there was very much a sentiment amongst the political leadership and many senior officials that Australia needed to have an arm of government that could collect foreign intelligence and it could undertake what it called special operations in those days.

GD: And what were those roles?
PS: There were two primary roles when the Service was created on the 13 May 1952. Prime Minister Menzies signed off on the charter for the Australian Secret Service – as it was known originally – and that charter is framed in my office. It basically directs its initial and first Director of the Australian Secret Service, Alfred Deakin Brookes … to do two things:
Undertake the collection of foreign intelligence offshore; and secondly conduct special operations.

The way special operations were defined was very much in the manner in
which the military in the Second World War had undertaken special operations, clandestine operations, sabotage operations, those types of activities envisaged in a time of war. It would be that arm of government that would be able to undertake paramilitary operations but at arm’s length from the government.
GD: The culture clash between ASIS and External Affairs in that first decade; ASIS is based in Melbourne, not in Canberra; ASIS looks towards the British Secret Intelligence Service, which is referred to as Head Office; On post under diplomatic cover, ASIS officers sometimes come up against their Ambassadors who worry about the dangers of spying; And ultimately, the head of External Affairs Arthur Tange seeks to abolish ASIS.

How do those origin stories shape your Service?
PS: I think it was a significant factor in the formative years of ASIS. For those in the diplomatic service in the early years, I can read into the history a very real anxiety about having the overt and covert elements of government working in parallel.

With ASIS having cover departments like Defence and like External Affairs, it brings to the fore concerns about ‘well if mistakes are made, who carries the can?’

GD: What does ASIS do today?
PS: Three main functions. Firstly it collects intelligence. As we did on the 13 May 1952, we continue to obtain for our government, intelligence from overseas.
The second function is what I broadly describe as intelligence diplomacy. The fact that we have counterpart organisations almost in every country of the world—intelligence agencies talk to intelligence agencies, they share information.

They will often have conversations where that line of communication can be on some very sensitive subjects that the diplomats prefer not to have or,
indeed, countries on the other side would prefer conversations to be held between intelligence chiefs rather than diplomats. There’s that element of intelligence diplomacy.

The other element of intelligence diplomacy is in the region, in our near region, there are countries that actually need some support and help, some capability uplift, to let them defend their own national sovereignty
better than they currently are.

So, again, we help with training programs and deliver some capabilities to countries in our near region. So that’s the second.

Firstly—collect intelligence. Secondly—intelligence diplomacy. The third main one under the Act, the Intelligence Services Act, there’s a Section 6.1 e provision which indicates that the Minister can direct us to do activities—and that has obviously the ability the government, the ability that if they
wish for us to undertake disruptions or activities that are probably going to be enabled by good intelligence. But actually allow us to undertake disruptions, whether it’s disrupting a terrorist plot or some type of activity where there is an action that occurs.

That’s the third broad category. Those activities I can’t authorise, they have to be authorised by the Minister and the way the Act is written
is that the Minister authorises an activity like that, she also needs to consult other Ministers including the Prime Minister, who may be affected or impacted by those activities that we do.

GD: Where does human intelligence fit in the cyber age / the digital age?
Well, humans are a social animal. There is human along with other forms of intelligence, you mentioned cyber. Well-informed, thoughtful individuals will recognise and appreciate what they say over telecommunications devices and what they say by way of email, that there are agencies that
can collect that type of intelligence, and a lot of people know that and therefore avoid that form of communication.

So really what most countries need is a combination of cyber, SIGINT and HUMINT.

Those sorts of conversations are normally held in inner circles, and
are between humans, and will always be that way.

So there is an interesting medium to long term dimension to this, as a general rule closed societies run the risk of a greater number of individuals willing to betray the secrets of their country, because they are not happy, they don’t get a voice.

We get a voice every three years, we go down to the local school and we vote. But there are a lot of people that don’t. That is one motivation.

That’s the legal basis on which we are held to account. Held to account
politically by my Minister, the Foreign Minister, to whom I am answerable. Answerable in an accountability sense to the Inspector General of Intelligence and Security, who has the powers of a standing royal commission.

The IGIS and the staff of the Inspector-General literally drop onto my
computer systems, my highly classified systems, they can look at any files, and it is all made available to them. So at any time if they have concerns about legality or propriety of what we are doing they can actually go in and have a look. Then to Parliament through the Parliamentary Joint
Committee of Intelligence and Security who looks more at our administrative aspects of the Service.

But it’s there in the ISA and observed in the breach every day by the Minister and the Inspector General.

GD: Let’s finish this with a discussion of risk. How much harder is it, how much riskier is it, to actually
get human intelligence now?
PS: Well there has always been risk involved. We accept risk, we can’t be cavalier. There is a very strong thread of education, knowledge and understanding about risk management. We have a whole area
separate of the operational line-areas that undertake compliance and risk management, so they oversight operations independently to ensure that risk management techniques are adopted in the way that many organisations think about risk management.

Risk has always been part and parcel of what we’ve done, but I would say it
is deeply entrenched in the way we think about our activities and operations, and depending on the overall risk at the end, the overall risk determines who ultimately is the delegate is to approve an
activity or operation.

Obviously the highest risk ones, I will be the delegate, but there will be lower or moderate risk activities where people at lower levels can approve the activities or operations. I think we’ve got it about right, in terms of, strong thread of risk, right through the organisation in the way
we plan activities—but an agility through the delegation through to overall risk that lets us generate activities quite quickly, certainly at the more low-to-moderate end.

Obviously the high-risk activities I take responsibilities for those in case they are compromised.