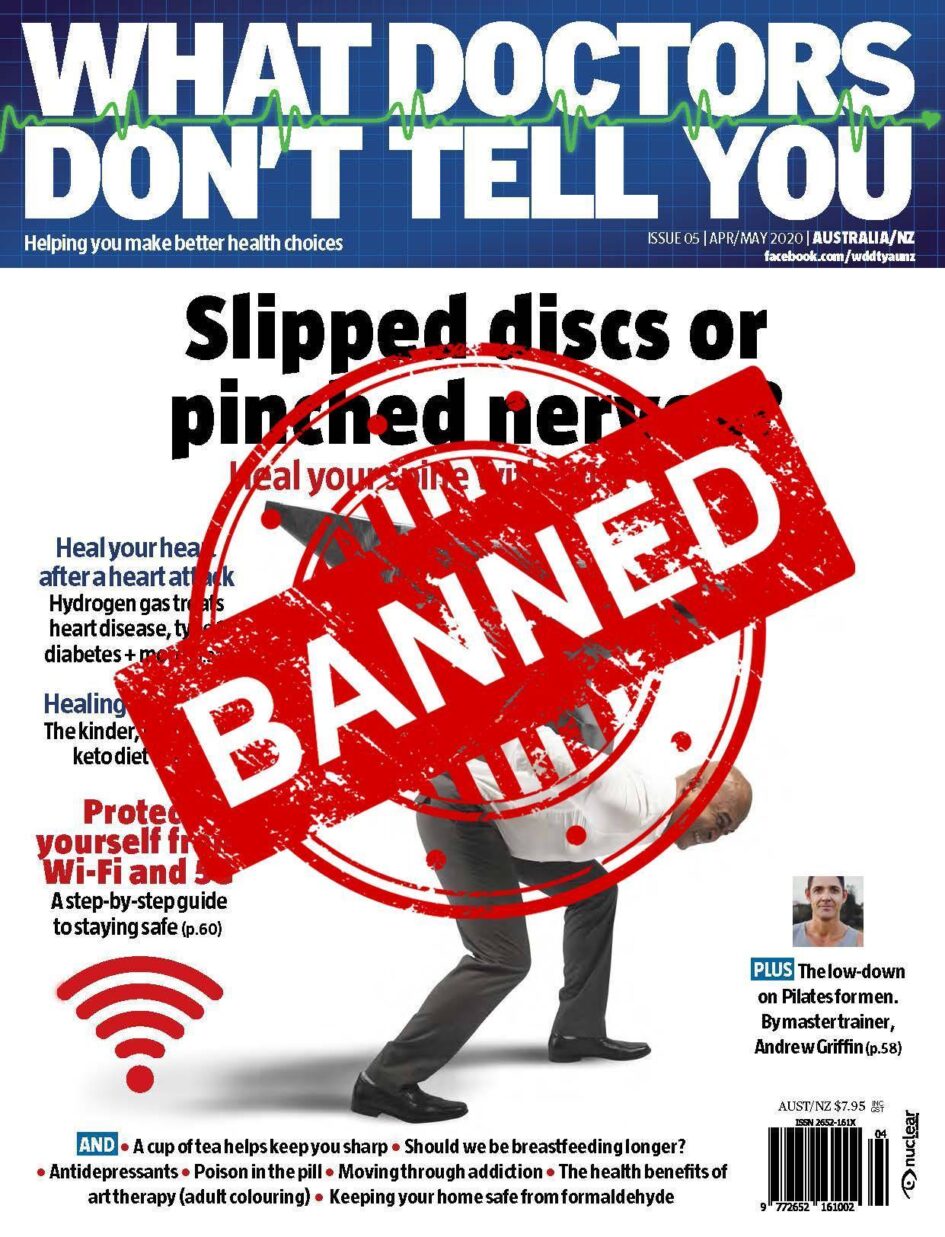 A magazine that publishes about complementary therapies, alternative medicines and protection against 5G was recently taken down from supermarket shelves across the country.

Coles and Woolworths bowed to pressure from radio host Ben Fordham to pull ‘What Doctors Don’t Tell You’ Magazine, the latest victim of new pushes to ban COVID-19 “thoughtcrime”.

An alternative medicine magazine has been pulled from the shelves of Coles and Woolworths after a radio host slammed it as “dangerous and misleading”.

What Doctors Don’t Tell You is a magazine that publishes the latest healthcare news, alongside information on therapies and medicines, featuring a host of articles and stories written by leading experts and respected regular contributors.

The launch issue issue of the AUS/NZ edition was released for readers in Australia and New Zealand in August-September 2019. It is published bimonthly and the issue the latest issue is the fifth edition.

The decision by to pull the April-May 2020 edition, for which I had already picked up a copy and was impressed to see in stock, was made in late April after Sydney 2GB radio host Ben Fordham expressed outrage at it being on the shelves in Australia’s two biggest supermarkets.

The issue in question featured a step-by-step guide to protecting yourself against 5G technology, as well as a number of holistic and alternative pieces on medicine and well-being.

On Twitter, Fordham shared an image of the latest edition’s front cover, accusing the magazine of ‘downplaying the dangers of coronavirus’ and linking vaccines to autism.

Following pressure from 2GB and Fordham, the supermarkets complied with the appeals.

“Coles does not endorse the content of this magazine,” the supermarket said in a statement to 2GB.

“Coles is removing it from all stores nationwide. We encourage everyone to listen to help authorities in regards to COVID-19.”

In a later update, Fordham said Woolworths also confirmed it would remove the magazine from sale.

“We’ve informed the supplier we’ll be removing the magazine,” Woolworths said in a statement.

“We would encourage our customers to seek and follow expert medical advice.”

Following the decision, the publisher has spoken out against Ben Fordham for his calculated effort to censor free speech in a world of COVID-19 restrictions.

After a successful bid by Ben Fordham and 2GB to pressure supermarkets into removing the magazine from shelves, many have expressed concerns over the targeted nature of the move.

Nuclear Media Chief Executive, Michael Downs, said the publisher did not blame Coles and Woolworths for not wanting to cause controversy in a growing age of social media.

“We obviously think the decision is misplaced and reactionary, but this is the world we live in,” he told reporters. However, he continued to slam Fordham for his actions to remove the established brand:

“Our problem is not with the supermarkets, it’s with Ben Fordham and 2GB.

How pathetic that ruining livelihoods, censoring well-researched information and shutting down freedom of speech is considered ‘having a win’ by this immature individual.”

Downs says the 5G article in question was thoroughly researched and “very sensible”.

He pointed reporters to the magazine editorial panel, which includes doctors from the US and UK — described as “leading pioneers in nutritional, environmental and alternative medicine”.

Asked if he would be approaching the supermarkets to reconsider or for any further comment, Downs said “I think this ship has sailed”.

Despite the moves, Downs said the feedback from readers had been “overwhelmingly supportive” and they could still source the magazine through newsagents or via online subscriptions.

The scenes we are witnessing are becoming far too commonplace in a new era of COVID-19 censorship and campaigns to stamp out ‘misinformation’.

Today, with the COVID-19(84) saga continuing to reach unprecedented heights, the event has triggered what is now described as an ‘infodemic’. A battle of information in the public sphere.

The removal of magazines from supermarkets shelves is the first example of censorship in the physical world, and mirrors existing battles taking place in the realm of the internet during COVID-19.

Evidence suggests that the foundations are being built for an approaching era of COVID-19 ‘thoughtcrime’ — where all those who oppose consensus narratives will become ‘unpersoned’.

In George Orwell’s Nineteen Eighty-Four, it was the state that determined what constituted acceptable speech in keeping society orderly. In 2020, the state is joined by a small cadre of companies in Silicon Valley, now wielding power over what we are permitted to see and say online.

Much like Orwell’s novel, during the COVID-19 saga, free expression and open debate is being replaced by a technocratic system of censorship, where anyone who disagrees or thinks independently is guilty of a thoughtcrime and is ‘punished’ by being silenced.

Once again, clowns like Ben Fordham believe they can control the narrative and the flow of information. Supermarkets gladly sell magazines full of lies, half truths and celebrity nonsense on a regular basis, so what is the issue? Ben must have felt real ‘triggered’ that particular day, at least.

Hey, Ben: We are adults, capable of critical thinking and objective analysis, and we can consult with whatever materials we choose to. You don’t get to decide for us, pal.

Australians are entitled to have the option to consider all positions on any topic and they most certainly don’t require your assistance to sort it out for them.

This piece was originally published by TOTT News, Australia’s media outliers. It is reproduced here with their kind permission.